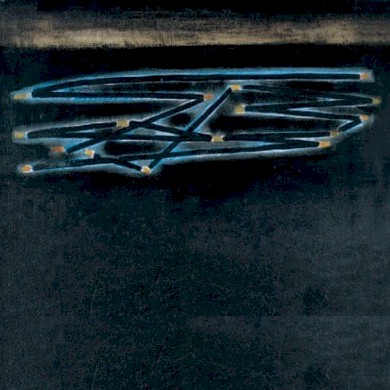 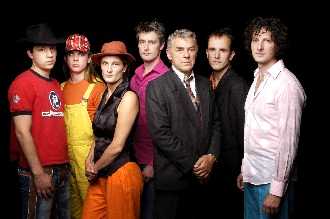 The Rosa Ensemble and Hans Dagelet (vocals and trumpet) are a group of Dutch musicians who have been performing their Beefheart tribute under the title ‘Selling Hoovers in Mojave’ at venues throughout Holland since 2002. This has now been released as an album.

They have translated Don’s lyrics into Dutch and these covers are interspersed with some original instrumentals and some Zappa covers. (Why Zappa covers on a Beefheart tribute?!!) The music has classical and jazz tinges to it, but I found the vocals difficult to listen to at first. (It became easier when I was able to follow it with the Dutch translation included in the CD booklet).

They have also taken the unusual approach of using some of Don’s spoken words from the ‘Some Yo Yo Stuff’ film and putting them to music.

An interesting album which takes a while to get into, although personally there is too much Zappa influence in some of the music for my taste.

Daniel Cross from the Rosa Ensemble kindly agreed to answer a few questions about this Beefheart tribute album.

Radar Station: Can you tell me about the background to Rosa Ensemble
doing this tribute?

Daniel Cross: I learned about Beefheart’s Trout Mask Replica by
the age of twelve. At that time I didn’t understand a bit of it.
I was listening to Zappa, King Crimson and Talking Heads (quite
another planet) and left Beefheart alone for nearly two decades.
Getting to know more about Zappa, Beefheart was always somewhere
in the corner of my interest. A couple of years ago this interest
broke open and I started listening to his music. I was amazed, distracted
and intrigued. Somehow I even saw a link with the music we are making
here in Utrecht, Netherlands, faraway from the Mojave and below
sea level.

Rosa is a contemporary music ensemble, or a new music ensemble.
At least, that’s what we were. The group is slowly moving towards
a new, very Rosa kind of sound. Based on traditions in not only
contemporary composed music (Xenakis, Andriessen, Berio, etc.) but
also rock, jazz and electronic music. The complexity of Trout Mask
Replica reminded me of modern chamber music we used to play like
Ferneyhough or Xenakis. I thought: well, If Beefheart can move on
slowly from the blues to a new avantgarde in music, maybe we can
try to meet his music somewhere down the line.

We started reading Mike Barnes’ biography and transcribing his
music note by note, finding out that there was a lot of nifty arrangements
involved, and a lot of rehearsals too. Take Frownland for instance,
that was quite a job. but we learned the notes and made a Rosa translation
out of it.

We also decided to translate the lyrics for two reasons: There
was no way any man could perform these lyrics like Van Vliet did,
so why not find a totally different form and sound (we even considered
an opera soprano to sing Beefheart!!) and the lyrics are so powerful
and colourful that a Dutch translation would give the audience in
the Netherlands quite a different view on the words.

RS: Why did you choose those songs?

DC: We took Beefheart songs that gave us the opportunity to translate
music and words in different ways. Blabber ‘n Smoke is a more or
less traditional cover, but when you listen to the Thousandth and
tenth day you hear an arrangement in, what the German composers
call, a Farbenmelodie. The leading melody is changing instruments
constantly. Doctor Dark has a moody kind of Debussy intro and Orange
Claw Hammer, which is accapella in the original, is now an electronic
collage using samples of all kinds of other Beefheart riffs like
Golden Birdies.

We also tried to you use the filosophy of the Explosive Note Theory
in our own material. Listen to The great horse massacre or Broadway
Bookee Wookee.

RS: Why did you take the words from the ‘Some Yo Yo Stuff’ film?

DC: When we watched the Corbijn film we noticed the short and edgy
words by Van Vliet, both powerful and funny. The lines of a creative
mind, very theatrical and even political. We where looking for interviews
by Van Vliet to use in our performances to create a contrast with
the song lyrics. The yoyo lines where very useful.

RS: Why have you included Zappa music in a Beefheart ‘tribute’
album?
(I’m probably only asking this because I am not a great fan of Zappa’s
music – he had a lot of good ideas and I liked to hear him talk
but only really like his early albums)

DC: For us, simple minded Dutchmen there is quite a relationship
between the two, Zappa and Van Vliet. There’s is also an extreme
contrast between the two, in music, in personality, in maybe every
other thing. And contrasts are very useful in a project like this.
As you can see on the CD, we used two very little up tempo songs
by Zappa, oldtime favourite Lumpy Gravy and ska vamp We are not
alone. We used these songs as in- or outro’s in larger segments
of the show, nothing to worry about!!

Another thing: The way the Hoovers CD is put together is very much
the Zappa way. It’s a collage of live material and studio overdubs,
all edited in the computer before mastered in a high end studio.