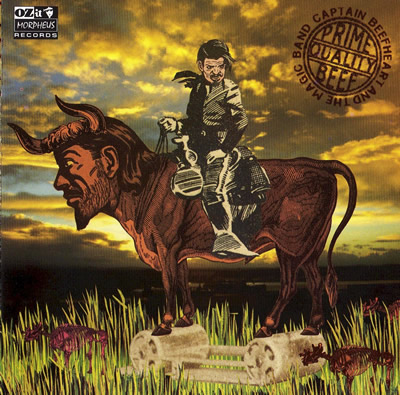 Live and Studio Recordings. This is a hand numbered limited edition cd. These recordings are from various years both studio and live all from the Captains 70s period. Sound quality is excellent.

I’ve learned by now not to hold out too much hope when Ozit release another Beefheart CD. But this time they’re taking the piss …

‘Prime Quailty Beef’ … for heaven’s sake, Ozit, get a grip. This is second rate stuff even if it is decent sound quality (although, at least that’s an improvement on your usual shoddy sound). But ‘Sweet Georgia Brown’! … By no stretch of the imagination is that ‘prime quality’ anything let alone quality Beefheart.

Well, it’s the Crazy Little Things (semi-legitimate release) CD of the 1974 Cowtown, Kansas show (including the two versions of Peaches) mixed in with some of the unphased Strictly Personal tracks copied, I would guess, from the Mirror Man Sessions remixed CD released by Buddha in 1999. Do they have no shame? There is also a second version of Beatle Bones (which starts part way into the song) that I have to admit I’m not sure where it comes from.

Why include a full live show but completely change the running order and then drop in some unrelated tracks? Ozit’s motives (apart from moneymaking) are beyond me. 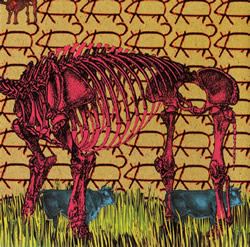 The ‘full colour eight page booklet’ contains absolutely no information whatsoever about the tracks on this CD. The only text relates to adverts for two books published by Ozit (uncredited reprints of the Lives & Times of Captain Beefheart and Lives & Times of Frank Zappa from the mid 70s).

The back cover lists the track titles but that is all. There is, significantly, no publishing information listed anywhere.

The booklet includes several photographs of Don, most of which
have been colourized, interspersed with lots of pictures of cows.
Not very helpful and not particularly original. As for the cover
illustration …

Perhaps more telling is the illustration of the bovine skeleton … is this Ozit owning up to picking Don’s bones clean?