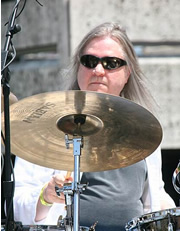 Michael took on the daunting task of drumming for the Magic Band reunion tours when Robert Williams was unable to carry on playing with them. This allowed John French to take on vocal duties.

Michael’s introduction to the band came from Mark Boston. The two of them had played together for many years in a band called Duck which toured US military bases around the world. He’s also played with country singer Leon Everette (as did Mark) and Denny King (another famous Lancaster musician). Michael had auditioned for the drum slot in the Magic Band in 1976 after having met Don but wasn’t able to take it on due to other commitments.

Since Michael stopped touring with the Magic Band he has been pretty busy producing albums for Drew Tillman and Caleb Mcleod as well playing drums on a lengthy tour with Tommy Tutone.