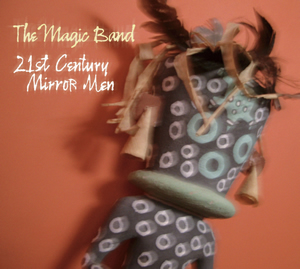 The music was recorded live on tour and it features performances from the shows The Magic Band played in 2003 and 2004 at the Royal Festival Hall, The Garage, Edinburgh Liquid Room, and the ATP festival in Los Angeles.

John French took on the task of sifting through recordings of their live shows to compile this collection. He told me:-

The live CD is just the best of stuff from tours. There was one exemplary concert in Nottingham that put all the rest to shame in terms of performance. There are glitches in almost all the other performances — tunings, missed notes, etc. I did one of my best drum solo intros in Edinburgh, into Abba Zaba (we switched between On Tomorrow and this for drum solo time) but the actual performance of Abba Zaba wasn’t as good as some others. I was faced with an onslaught of those kinds of decisions as I had to listen to 7 CDs of performances and sort through all of this in 3 weeks. It was a bit mind-boggling.

Inevitably there is some duplication with the Back To The Front album but these are live performance as opposed to studio recordings (even if those were pretty much live). The dynamics are different, but the quality is excellent. They’re well recorded and as John says they’re the “best of stuff” … that drum intro to Abba Zaba is great and the song itself is pretty damn good too. Also included (and not on Back To The Front) is one of the tour highlights, Mirror Man, complete with amplified flour grinder and John using a special mike to distort his vocals.

If you were lucky enough to see the band live then you’ll want to get a copy … and if you missed them on tour you’ve got to get one.

The DVD contains edited footage from the Camber Sands show in 2003 – the first Magic Band reunion show. It’s shot mainly from the back of the venue over the heads of the audience although occasionally there are cuts to another camera which is right next to the stage and seems to be moving about a lot. The songs are only instrumentals as for some reason Robert Williams is only glimpsed very briefly once on the side of the stage but doesn’t actually play. It’s a good little bonus to have but there must be a story behind why not all the show is included