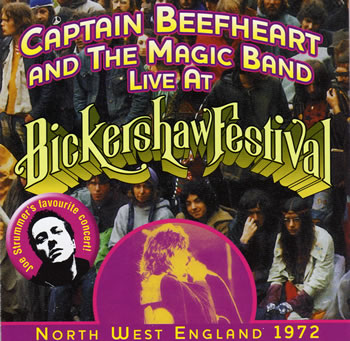 Fantastic set from the Captain with full biographical CD booklet of the show. There are a few references to the Spotlight Kid throughout the show, a reference to the spotlight being played on the band from the lighting tower in the audience. At the beginning of the tape after Rockette Morton’s bass solo, there is some weird wordplay on The Mascara Snake. Firstly Rockette, remarks “The Mascara Snake” and then during a pause in the solo Beefheart says “And this is the Mascara Fake” Rockette then plays his ass off some more, pauses and then he says “and this is the Mascara for gods sake”. The solo finally finishes and then Don says “and this is the Mascara….” to much laughter from band and crowd alike. “Why don’t you turn off the monitors, we’ll do this next composition without the monitors??? We don’t need the monitors to play. Doh! Oh, it’s not the monitor. Now everybody’s going to know we’re human beings…”

A legendary festival with a scorching set from Don and the lads despite having to wait until 4am in the morning to play. A recording of the complete set has been circulating amongst collectors for many years … it was recorded by former Steal Softly fanzine editor, Paul Brown. Not the best of recordings but considering the conditions it wasn’t bad, albeit a bit trebly and slightly distorted in parts. Some tracks from this found their way onto the Grow Fins boxset and the Viper label compilation Magnetic Hands. A better sounding recording also exists but, sadly, isn’t the complete show.

It will probably come as no great surprise that Ozit have NOT unearthed a hitherto unknown recording. Instead they’ve taken Paul Brown’s recording and given it a bit of a bass boost … there is very little else that can to done to improve the sound. (Because of the sound quality I know of one label that decided it wasn’t worth releasing commercially).

The ‘full biographical CD booklet’ is ten page fold-out number. The text is taken from the excellent site – http://www.ukrockfestivals.com/bickershaw-menu.html – although, true to form, Ozit don’t acknowledge this. However, they do give the web address on another page. There are six images of Don and the Magic Band included within the text. None you probably haven’t seen before … but at least they are from Bickershaw or another 1972 show. Two pages of the booklet is taken up with Ozit selling their other wares of doubtful origin – including what appears to be an overpriced CD of the famous vinyl bootleg What’s All This Booga Booga Music?

As can be seen from the CD cover Ozit deem it necessary to include a large picture of Joe Strummer as an endorsement of the show … as Joe is, sadly, no longer with us it’s typical of Ozit’s bizarre take on things that they feel they have to do something like this.

So, do you want to pay 12 quid or 20 dollars (or whatever it costs) for this when any self-respecting Beefheart fan would be happy to burn a copy of the show for you? It’s your call …

I have a confession to make … I did not listen to the Bickershaw disc all the way through. I wish I had because there’s even more stupidity on Ozit’s part that I could have ridiculed in my original review. Thanks go to David Moser for the heads up on this particular piece of madness.

According to the listing on the cover track 13 is Steal Softly Thru Snow and track 14 is Golden Birdies. However, track 13 contains both of these tracks without a break. Track 14 is a separate unlisted song … but it’s not part of the Bickershaw concert.

This mystery extra item is in fact an instrumental version of Run Paint Run Run taken from the Shiny Beast outtakes collection. It’s not even a good version of the track … it seems to have been put through a sonic scrambler to make it sound as bad as the rest of the Bickershaw recording.

Unbelievable! What is the point of doing this?

The Ozit level of incompetence continues to appall …

If anyone is able to complete or update any of
the information above, then please do get
in touch.