Lick My Decals Off Baby releases 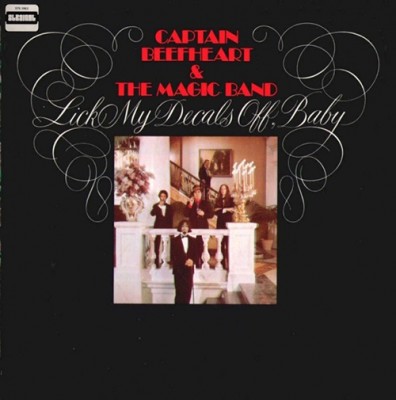 Gatefold lyric insert has full credits rather than on sleeve.

Pretty much the same as the US issue but without the lyric sheet (again!). Made and distributed by CBS 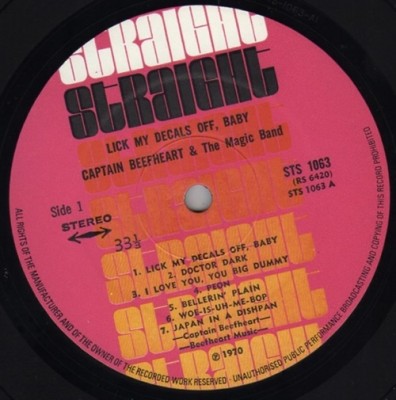 Cover only has the “Straight” thought-bubble logo.

This is very similar to German issue of Trout in that it has ELECTROLA GESELLSCHAFT M.B.H. KÖLN on back of cover, thick smooth distinctive inner sleeve and pink/black/white Straight labels. This is down in the German edition of the Colin Webb book as EMI. No lyric insert in copy owned by Gerry Pratt. Cover is shiny and has the “Straight” thought-bubble logo on front bottom right.

Has the pink/black/white Straight label with ‘MADE IN FRANCE BY PATHE MARCONI’ around the edge. 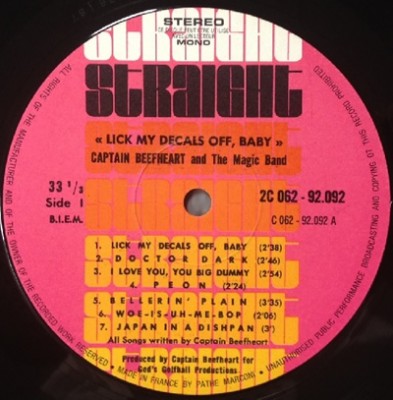 The back cover includes the ‘Decals’ poem but not the painting. It’s not known if a lyric sheet was included. 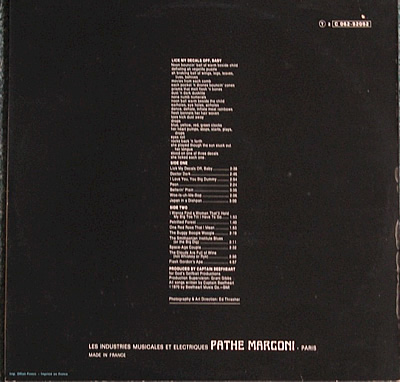 Thanks to Pascal Moru for the cover scan

Cover and label have the “Straight” thought-bubble logo.

Cover only has “Straight” thought-bubble logo.

Has an 8 panel insert with lyrics

Thanks to Rob Pachol for the scan of the long box.

The cover is an exact reproduction omitting the ‘Straight’ or ‘Reprise’ logos found on vinyl covers. The inlay for the CD is clear with a white background paper (no photo or text). The inlay card (not a book, alas) reproduces the back cover painting and the “Decals” poem ONLY. The ‘Straight’ thought cloud logo is in the lower corner along with the Enigma Retro logo. The inlay card opens to three panels, two of which are lyrics and credits – similar in format to the original vinyl release but I’ve never seen the lyric sheet from the vinyl (my copy is a later pressing). No additional poems or graphics are included.

Booklet contains all lyrics and artwork from the vinyl and includes the usual Japanese lyric sheet insert. Liner notes by OHTAKA Toshikazu. Thin cardboard spine text is in Japanese.

This release is of dubious legality. It is a nicely packaged mini-LP version of the album; a card slipcase contains the disc looking like the vinyl Straight issue but in a light grey sleeve with track list, the insert contains all the lyrics (but not You Should Know By The Kindness Of Uh Dog The Way Uh Human Should Be), pictures of a promotional sticker and of the band. 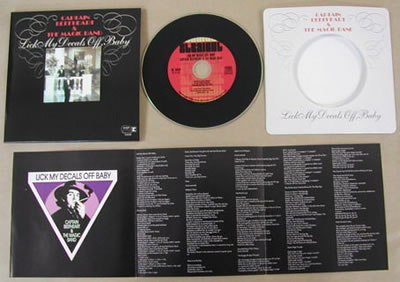 Everything has been put together well apart from the names of the band which for some reason also includes Jerry Handley, Doug Moon, Jeff Cotton and the Mascara Snake!

Packaged in a jewel case with booklet containing lyrics in English and Japanese. It has been remastered by Ryuichi Tanaka (Mixer’s Lab) at Warner Music Mastering. The sound quality on this album is probably the best around at the time of writing, it’s much better than the weak remastering job done on the Sun Zoom Spark version.

The Spotlight Kid / Lick My Decals Off Baby Double

Four rather strange adverts for the album which mainly consists of some woman shouting quite a bit interspersed with short bursts of songs.

A DJ only release to promote the Beefheart and Ry Cooder 1971 tour on the radio stations in towns visited. Two 60 second adverts.