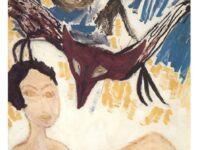 –A big, big bone ‘o contention that led to the longest of (multiple) schisms between Don and his childhood friend / sometime patron Frank Zappa (“Do you know my friend who looks like a fly’s leg?” Don would ask music writers disingenuously in the aftermath of the failure by Frank to release this album in ’76).

Basically after the commercial non-starter that was the great “Clear Spot”, Don and his band were dropped unceremoniously by Warner Brothers Records, who in one capacity or another had been Don’s Best Friend for some years. He also suffered the growing discontent of the current Magic Band, who either quit on him or (according to Don) he eventually fired. Out of the wreckage of the good ship MS Beefheart Don re-grouped and subsequently re-emerged with new management, a new label Mercury Records, a new band lineup, and two curious attempts at wringing a buck by radically simplifying his music in a period often described by Beefheart connoisseurs as the Tragic Band era: 1974’s “Unconditionally Guaranteed”, where on the cover Don was pictured clutching actual dollar bills in his fists as if to send up his own stab at commerciality– and 1975’s “Blue Jeans and Moonbeams”, with cover art by Don’s cousin Victor Haydon (The Mascara Snake). These albums have their adherents (including every Australian Beefheart fan I’ve ever met, also tastemakers like Julian Schnabel and Lauren Hutton). But these albums didn’t sell either, and pretty much cleared out what was left of Don’s hardcore fanbase, to the point that he was more or less lamming it for awhile and telling people he’d given up music to become a carpenter (like Jesus!) in an attempt to avoid a reckoning with his thuggish management coming to collect their due.

Enter Frank, who helped clear up Don’s debts and legal situation, and then hired him for two weeks of work on the road in the US with The Mothers as their special guest, which resulted in Frank’s great “Bongo Fury” album, which put Don back again in the public eye. Frank and his manager Herbie Cohen then engaged Don to record an album for their new label DiscReet, which Don proceeded to do with a new band lineup consisting of longtime time-keeping mainstay John French (Drumbo) returning to the fold on drums as well as guitar, Don and Frank’s teenage friend from Lancaster slide guitar monster Denny Walley, agile multi-keyboardist John Thomas, and young recruit and Beefheart adept Jeff Moris Tepper on guitar. The band basically were locked into an airless storage facility in LA to rehearse the album, then went into the studio and emerged some weeks later with the stone masterpiece that is “Bat Chain Puller” (and wazzat mean, do you say? Does the phrase “don’t yank my crank” mean anything to you?).

Talk about a return to form. And it gets better and better and better. In fact, Frank pronounced it the best album Don had recorded since “Trout Mask Replica” in some advance pr he did for it–but then there was a little problem when Frank found out that Herbie the manager had paid for the recording by direct depositing royalty checks that were actually due Frank…which prompted Frank to sue Herbie…who counter-sued–and thus this barn-burner of an album was consigned to limbo “in litigation” forever and a day, until the Zappa Family Trust under Gail Zappa finally shoved it out there (Don now being conveniently dead) in 2012, with not even an attempt made at engaging Don’s estate to provide some real cover art– just solid black with white lettering spelling out the artist’s name and album title (kinda like the Velvet Underground’s black second album cover without Billy Name’s embossed arm tattoo). Noiiiiiiiice! Doncha love the music biz folks? I know I do…

Anyway, other highlights include Denny Walley’s hypnotic slide guitar solo at the end of the sad but noble biker ode “Owed t’Alex”….also, a terrific recitation by Don of his fantastical surreal poem “Seam Crooked Sam” with French (music director on this album) accompanying Don on guitar, playing his very complicated transcription of one of Don’s piano pieces–and I have to say, French is a motherfugger on 6-strings–who knew?? And then there’s the plaintive, affecting “Oddjobs”, wherein Don brandishes his beautiful crooner voice in the first half, a tale of an itinerant loner who pedals up on his “formaheap bike” (“formaheap” being one of Don’s earlier poetic images circa “Trout Mask Replica”) and fixes stuff, enchanting “all the women / and all the young girls” in the process, who ask “why old Odd Jobs don’t come around anymore?” (a guy “whose basket was a whole candy store”). The second half of this opus practically skips along over a D pedal point with French beating out a merry loping rhumba-like rhythm on his tubs with Denny and Moris interlocking their guitars beautifully, making all sorts of arbitrary stops and starts while staying totally in synch throughout (basically, the band recreating the sound of Don’s own nervous system, reproducing exactly the way Don taped himself playing piano on these pieces, which he improvised / through-composed once and once only. Don was not technically capable of repeating himself, so you get all his stutters and nervous tics intact–which is part of the magic here).

My own personal favorite on this album though is the apocalyptic “The 1010th Day of the Human Totem Pole”, which has more relevance to our current world situation with every passing day. Listen, and marvel…Puller Puller.