Gary Lucas on Safe As Milk 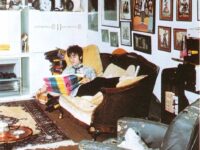 — produced by Bob Krasnow and Richard Perry, just in from NYC and hot off the production of Tiny Tim’s first album, and featuring 17-year old guitar hotshot Ry Cooder who helped pull the arrangements together, this album went largely unheard in the US on release but was hailed and broadcast frequently over the BBC by Don’s patron saint John Peel — so much so that photos of both John Lennon and George Harrison show them festooning their walls back in the day with the day-glo bumper sticker sporting the face of a doll-like baby that came free with the original album pressing (John boasts two bumper stickers, affixed to the fridge where he kept his acid).

The album title according to Don is a reference to the strontium-90 fall-out from rampant atomic testing in the desert that was starting to appear in Mother’s Milk.

From the first note of the bluesy slide-guitar riff of “Sure ‘Nuff ‘n’ Yes I Do”, with Don coming in crooning like a lovesick werewolf: “Ah was born in the desert / came over from New Orleans / Came upon a tornado / sundown in the sky / I went around all day with the / moon stickin’ in my eye”–till the last note, the classical symphonic guitar/bass/drums flourish of “Autumn’s Child” (which Don and co-lyricist Herb Bermann claimed prompted a congratulatory telegram from Leonard Bernstein himself), you’re hooked! Everything about this album is marked with greatness. Every song’s a winner here which shows Beefheart stretching the boundaries of contemporary rock and pop music of the day both lyrically and instrumentally (check the theremin on “Electricity”), but still staying within a fairly recognizable and conventional song format.

Buddha Records reissued this album in the early 70’s with a quote from rock writer and Beefheart proponent Langdon Winner: “One of the forgotten classics of rock ‘n roll history”– and right he was.

Other highlights include the happy-go-lucky skipping neo-bubblegum whimsey of “Yellow Brick Road”, the African log-drum chant frenzy “Abba Zaba”, the down-and-dirty bluesy churn of “Plastic Factory”, the aforementioned theremin-laced doomsday reel of “Electricity” (Van Vliet: “Basically a square dance…you know, a bunch of squares, dancing”), and on and on…it’s a stone KILLER of an album, and a good introduction for novices to the essential Beef; basically, a Child’s Garden of Beefheart. Nothing on the album though, as good as it is, can prepare one for the psychedelic onslaught to come…which I will get to presently