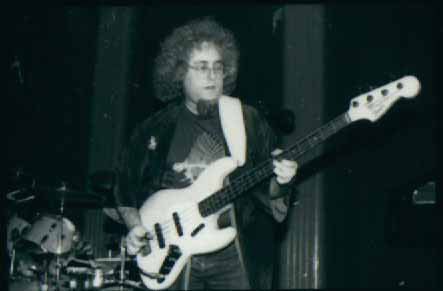 As a young teenager Feldman had visited the Magic Band at the ‘Trout’ house in Woodlands Hills. In 1976 he was to join the band to play keyboards, accordion and bass after Don had sacked John Thomas for playing on the second Mallard album.

After the demise of the Magic Band Feldman has been in demand as a sideman and as a producer, playing with Pere Ubu, Snakefinger, Polly Harvey to name only a few.

He has been described as a “joy to work with too: so calm yet so surprising”.

He has regularly toured as part of Polly Harvey’s band (playing bass and keyboards). In 2003 he was touring as part of the Residents band on their ‘Demons Dance Alone’ tour.

A band called ‘kNIFE & fORK’ is EDF’s was a personal project – see below for more about this – and has toured as support for P J Harvey.

He continues to keep busy performing, keeping the Residents myth alive and being in demand as a producer as well as a musician.

Thanks to the Eric Drew Feldman Project website (which seems to have stalled at 1998) for a starting point to this discography. The following list of albums he has been involved with is not complete – if you can add anything please contact me steve@beefheart.com

This band is a collaboration with San Franciscan bassist, vocalist and songwriter Laurie Hall plus Chris Sipe on drums, Sunshine Haire on guitar and Jennifer Hall on vocals.

Guitarist extraordinaire Phil Lithman, aka Snakefinger, had established a career in the UK on the club circuit, and along with ex-Mighty Baby guitarist Martin Stone recorded and performed as Chilli Willi & The Red Hot Peppers. He then moved to the US and became an integral part of the sound on the Residents early albums. His own unique vision was captured on a number of albums before his sudden death from a heart attack in 1987. Eric Drew Feldman appeared on some of his later albums and also toured with his live band.

Check out Hank Grebe’s site which has some excellent photographs of EDF playing live with Snakefinger in Wisconsin.

Having its origins in The Club Foot at 2520 Third Street in San Francisco in 1983, the Club Foot Orchestra has had a ever-changing personnel. It now specialises in providing original music in old style settings for silent movie classics such as ‘Nosferatu’, ‘Metropolis’ and ‘Sherlock Junior’. Eric Drew Feldman played keyboards for a while when Snakefinger was also involved. They were both on the ‘Wild Beasts’ album but I’m unsure whether they recorded anything further with the Orchestra.