By: Graham
In: By or about Don Van Vliet
Tagged: Captain Beefheart interviews and texts 1966 - 2001
With: 0 Comments 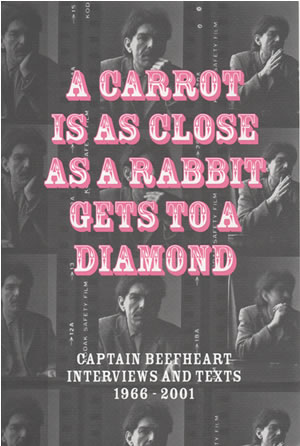 The title pretty much says it all about this book. This is a collection of around 40 articles, reviews and interviews about and with Don van Vliet over nearly five decades. From the 1966 ‘Great Gnome Biography’ press kit by Derek Taylor to the text of Bono’s chat on the phone with Don in 2001 (don’t let put off you though!).

Originally published in music magazines, some well known and others more obscure, all of the pieces are available on this website or on others around the net but they’ve now been conveniently pulled together into one handy volume.

It’s a large format paperback that’s well set out and easy to read … plus it’s in chronological order. It’s definitely a labour of love and has been compiled by a fan.

I’m happy to have a copy and just dip into it every now and then.

I believe it’s a limited printing so don’t hang about if you want one.