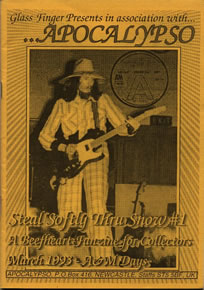 The “one & only” Beefheart fanzine for collectors. Totally dedicated to preserving the memory of the legendary Captain Beefheart & The Magic Band by devoting each meticulously researched issue of the long running fanzine to documenting in chronological order The Magic Band’s global musical legacy, preserved on glorious vinyl throughout the 60s, 70s and early 80s (& on into the 90s with their reissued metal counterparts!) and of course keeping you all updated on “What’s Shakin’ in Vlietland!”

APOCALYPSO FANZINES has delved into each period of The Magic Band’s recording history in almost religious detail starting with Steal Softly Thru Snow #1 – “The A&M Days”, and continued through to the eighth issue titled “Love Over Gold “, which concerns itself with the recording period and albums released in 1974 titled Unconditionally Guaranteed and Bluejeans And Moonbeams. The fanzine’s aim is to try and separate fact from fiction by talking to those that were there and to scour the many interviews and articles from this period to obtain this information.

Issue #8 dated February 2000 was the last to be published. It is unknown whether any further issues will appear but, sadly, it looks less likely as time marches on.

A short history of SSTS by Steve Froy

Appearing in early 1993, ‘Steal Softly Thru Snow’ was the brainchild of passionate Beefheart fan and archivist, Gerry Pratt, under the pseudonym, Glass Finger and publishing as Apocalypso. His plan was to publish two issues a year working his way through Beefheart’s career. In Issue #5 he wrote:-

[wp_quote]I’m not sure what happens when we get to the end … perhaps we should really go back to the start again and document it all in even more obsessive detail.[/wp_quote]

“Issue #1 – A&M Days” was a hand-numbered printing of 200 copies complete with ‘Release Captain Beefheart’ badge. It certainly was a labour of love and definitely not a money spinner although the print runs would increase to 400! To keep costs down SSTS was only printed in black and white but that didn’t really matter … it was the content that counted.

For fans of Beefheart SSTS was like a dream come true, a treasure trove of information old and new … as well as confirmation that there were still others out there who were under the thrall of Captain Beefheart and the Magic Band.

Each issue was based around a particular era or album with relevant detailed discographies for all legitimate and bootleg single, album, vinyl and CD releases. There would be short items about any Beefheart related topic, bits of news, reprints of music paper articles and record company promotional pieces, interviews with people involved with the band in any way plus longer articles written by other experts and collectors such as Colin Webb and Paul Brown. Artist Nulsh provided light relief with his marvellous drawings illustrating various Beefheart songs.

There was so much stuffed into every issue. A fan’s magazine for serious fans… Gerry always welcomed contributions from others and each issue would carry short items sent in by readers and additions to discographies from previous issues.

As well as SSTS, Gerry also published other items in a similar black and white A5 format:-

He was also preparing “Blimp over Europe #1”, documenting the band’s tours of the UK and Europe from 1968 to 1973, with major input from many of SSTS’s readers providing eyewitness accounts of shows. (It’s where my first piece of writing about Beefheart was published.) Another project was to be called ‘Eternal Thirst’ looking at the band MU involving ex-Magic Band guitarist Jeff Cotton.

Sadly, Gerry was not to finish these two projects. In 1995 he took his own life, much to the shock of those who knew him.

And for many of us we thought we had lost SSTS too. But in memory of Gerry and in recognition of the work he’d done to unite many Beefheart followers, two other fans, Colin Webb and Paul Brown decided to carry on the work Gerry had begun. It was Paul (aka Bloodshot Rollin’ Red) who took on the arduous task of compiling and editing each issue. He was able to publish “Issue #6 – Blowin’ the Stacks” which Gerry had been working on, as well as “Blimp over Europe #1”.

Issues #7 and #8 followed as did another volume of the “Big Bad But Beautiful Book of Beefheart Bootlegs” before ill health and family problems overwhelmed Paul and he had to close SSTS down.

SSTS is sorely missed although nowadays the internet is fulfilling much of what Gerry set out to do with that first issue in 1993. And here at the Radar Station we’ll carry on his legacy and continue to document the career of Captain Beefheart and the Magic Band in even more obsessive detail. 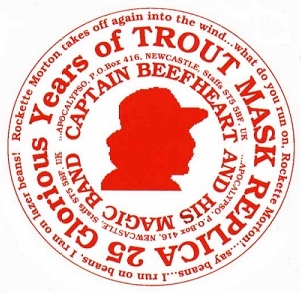