Captain Beefheart and His Magic Band(s) by Benoit Delaune, 2011

By: Graham
In: By or about Don Van Vliet
Tagged: Benoit Delaune
With: 0 Comments 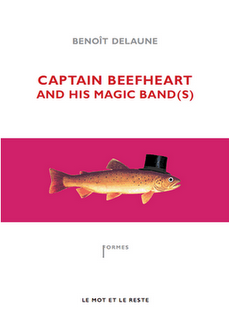 Rogue brilliant, tyrannical leader, singer monstrous. Many rumors and legends surround the artist known as Captain Beefheart. A school friend of Frank Zappa he surrounded himself with many often anonymous but brilliant musicians of his “Magic Band”. Captain Beefheart from 1967 to 1982 created – in just fifteen years and a handful of albums – complex polyrhythmic and polytonal music, based on deconstructed blues. Many musicians today continue to avail themselves of this important artist who suddenly and silently quit music in 1982 to devote himself fully to painting. This book aims to show the paradoxes constant at the base of creation from Captain Beefheart and His Magic Band(s) between almost cult excesses, integrity, vision, business failures and music with total freedom.

Benoit Delaune, Doctor of comparative literature, has published several academic articles on the relationship between literature, music concrete and rock. He led the editions of Notonecta and is also a musician.

Unfortunately my French is not good enough to read all of this book and to give it the review it deserves.

It is a nicely produced and printed paperback with a bit of an odd cover (that’s the publisher’s idea I’ve been told). All the album covers are illustrated in black and white and there’s a short discography.

The author is a Beefheart fan which is a good start. I asked Benoit if he could explain a bit more about his book:

I have tried not only to tell a day-to-day Magic Band story (it’s a short book, 150 pages!), but also to analyse their music, especially Trout Mask Replica which is discussed using some philosophic concepts, ie those of Gilles Deleuze’s. I’ve described what I call the “Great Beefheart Paradox”, Don Van Vliet’s apparent “kamikaze” or “sabotage” attitude (for example the Magic Mountain Fantasy Fair concert incident).

I have written about the guru aspect of the Magic Band’s life, and I’ve tried to show that the Magic Band music could be the result of psychological pressures, harassment etc. – BUT it remains one of the most FREE musical expression ever produced. And I have also written about the true talent and genius of those anonymous musicians, Drumbo, Zoot, Alex, Antennae, etc.

My book is called “Captain Beefheart and His Magic Band(s)”, the “s” was very important to me, as I consider that the 1965 era-Magic Band was a wonderful bunch of musicians, but also the 1969 band, the 1970, etc., even the 1979-82 band (one of my favourite). Every Magic Band sounds fresh, astounding, virtuoso. That’s a great lesson and this book was also for me, as a musician, a way of tipping my hat to all those wonderful musicians.

If anyone with better French skills than mine would like to send a review please get in touch.