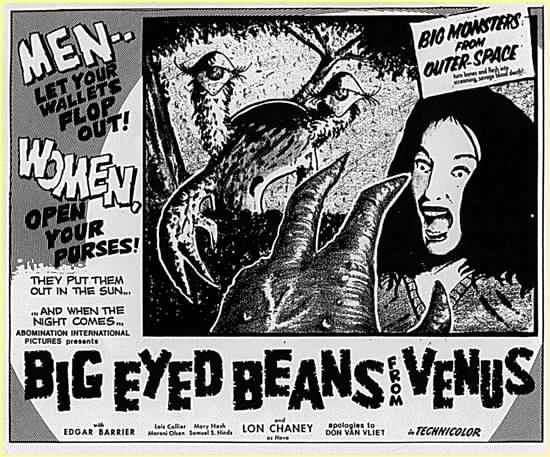 A 50s B-movie horror called Big Eyed Beans From Venus? Could it be true? Well, no actually.

Many thanks to Steve Bisette who conceived the cartoon for granting permission to feature it here. Steve writes:

‘That’s from a story I drew back in 1977 for Larry Shell’s underground comic 50’s FUNNIES; the art for the poster itself was by Joe Ragusa, a fellow cartooning school student, who collaborated with me on an overview of fake monster movies entitled “Forgotten Fears of the Fifties!”.’

Excerpted with the permission of SpiderBaby Grafix, from the comic book story “Forgotten Fears of the Fifties!” copyright 1978, 1999 Stephen R. Bissette and respective collaborators; originally published by Larry Shell in 50’s FUNNIES.

This image was conceived and designed by Stephen R. Bissette, drawn by Joe Ragusa, lettered by Rick Veitch, and obviously inspired by and quoting from the famous Captain Beefheart song (title and lyrics copyright God’s Golfball Productions.)