Beef art or grafitti – backstage at the Armadillo

By: Graham
In: Sketches
With: 0 Comments 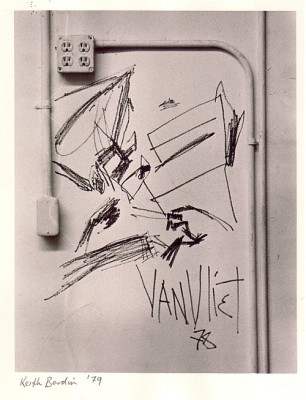 It’s well known that Don was always drawing with a black felt tip pen in the sketch pad he carried with him. He famously spent his downtime on stage during the Bongo Fury tour with Zappa and the Mothers doodling away.

In 1978 Don and the Magic Band toured to promote the Shiny Beast album. On Saturday 2 December they played the Armadillo HQ in Austin, Texas. At some point Don decided he’d take a break from his sketch pad and draw on the wall backstage instead using the wiring conduits as a makeshift frame …

Thanks go to Keith Bardin for sending this photograph that he took in 1979, and by doing so saving it for posterity. The Armadillo is no more and presumably the wall and drawing have long since disappeared.

I wonder if Don drew on any other walls?