By: Graham
In: 1971.02 Armadillo Texas
Tagged: Encounters in the wild
With: 2 Comments 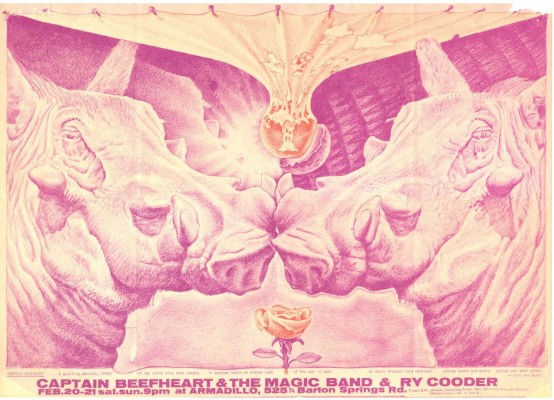 Back in early ’71, CB&TMB toured through Austin, Texas. This is the flyer for that concert. I have looked for weeks for this flyer, praying that I had not thrown it away!

The concert, of course, was incredible. Held at the Armadillo World Headquarters, it was filled to capacity with Beefheart fans. I think this must have been just after Lick My Decals Off, Baby had been released. I was absolutely amazed at these guys and their performance. I had seen many of the major rock groups of the ’60s, Hendrix, the Who, Joplin, the Doors, the Mothers, the Stones, etc., but I had never seen anything like Captain Beefheart & The Magic Band!

One more note: sometime around ’74 or ’75, CB&TMB were scheduled to play a local club here in Dallas (Mother Blues, I think). My wife and I went to this show, and as we stood in the ticket line I was vaguely aware of an “older” man (I would have been about 24 or 25) by himself directly behind us in the line. We took a table and when the band took the stage and Captain Beefheart came out, we realised it was him who had been standing behind us in the line, queuing to get in to his own gig!

Hope you enjoy the scan.