Back To The Front by The Magic Band discography 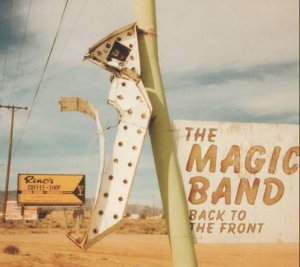 Recorded in February 2003 at Paradoxx Sound Studios in Palmdale when John French, Mark Boston, Denny Walley and Gary Lucas were rehearsing for their series of live shows.

This album is a combination of instrumentals and songs with John taking the vocals. The vocals don’t always work but most of the time they’re spot-on … the throat-shredding ‘Floppy Boot Stomp’ is particularly fine.

So much so that I was struggling for more words to describe it … luckily, at that very moment Radar Station visitor Andy Swapp emailed his thoughts on buying the album, and has agreed to let me use them here:

I have to say as something of a purist I was nervous about anything minus Don but have been hugely and pleasantly surprised. I also have to confess I had suspicions about who has claim to call themselves The Magic Band [no offence to those concerned but they are from different incarnations of the band] and felt sceptical about projects without Bill and Art and others.

Despite these reservations, I went out and bought it ASAP and have been playing it non-stop ever since.

Bottom line is that despite the fact that it is sans the Captain what would you rather hear … some Top Ten nonsense from no-marks like Marilyn Manson or some respectful revisits to some Cap’n Classics? No contest!

As Matt Groening’s joyous liner notes tell us, for a ‘straight to tape’ rehearsal these guys are awesome. John French on vocals is a pleasant surprise and clearly approaches such material with a sense combining reverence and boundless fun too. Mark Boston needs no comment from the likes of me. The Rockette – The Bass Guvnor. Simple.

Gary and Denny hold their own and bring to bear a freshness that is great to hear and adds rather than subtracts as they might so easily have done. They are both at one and the same time accurate and yet clearly not merely trying to duplicate. For me this is the area that could so easily have let them down. What do you do, match the originals note for note or try to add something new? Again with what I can only call reverence, they follow the originals and yet add some touches that defy description, their playing of such material is so masterful that perhaps only they could do it such justice [well ok there are a few other ex-band members who could have made it just as good if not better but that is to miss the point I feel.]

Overall for me it is this readiness to follow the originals and yet with an overpowering sense of joyousness they redeem any possible faults and bum notes [there are a few but too few to mention] with sheer bloody joi de vivre. 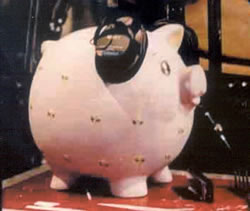 As Andy mentions above Matt Groening has written some sleevenotes for the album, and the card sleeve opens out onto a photograph of a china pig that will be familiar to those lucky enough to see this Magic Band perform live.

The front and back cover photos were both taken by Gary Lucas, who explained about them to the Fire Party after being asked what the hell the thing was on the front cover:-

That was a bent up weatherbeaten old metal sign (dunno for what) on a road outside Lancaster, Don was driving me and my wife around in his blue Volvo in the winter of 1980 when we came upon this thing that looked like modern sculpture on the side of the road. Don stopped, tremendously excited, and had me get out and photograph the thing, raving about its “artistic” qualities. A little farther down the road he showed me his high school (so much for the “I never went to school” myth) and the precise entrance way where many years previous he and his gang of buddies had neatly set the school principal’s car they had just hi-jacked (by hand! some strong dudes), effectively blocking pedestrian traffic in and out of the school for hours until a tow truck was called

The back cover photo was taken from the front seat of Don’s Volvo through the windshield, a typical desert vista.

Purchase Back To The Front