By: Steve
In: Life, Videos and DVDs
Tagged: Derek Laskie, DVD, Under Review DVD
With: 0 Comments 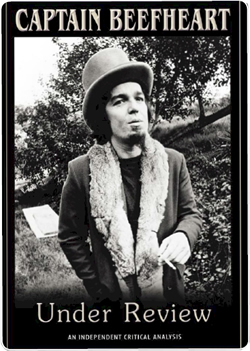 Without a doubt the most challenging artist of the rock era, the man formerly known as Don Van Vliet still retains an almost biblical dedication amongst the ever-increasing fanbase of ‘those who get it’. You either do or you don’t; the good Captain doesn’t attract the casuals!

Captain Beefheart – Under Review is a two hour documentary film tracing the roots and history of this iconic musical legend. Featuring rare live and studio performances of Beefheart, interspersed with contributions from virtually all members of The Magic Band – along with a panel of esteemed experts.The film also features rarely seen promo films, interview footage with Beefheart, TV clips, location shots and a host of other features.

Covering his entire musical career and with extra features including; ‘the hardest Captain Beefheart interactive quiz in the world ever’ and full contributor biographies, this is not simply the only Beefheart DVD on the commercial market, it is also the best ever film about the man and his music yet to emerge.

Under Review: the ultimate review and critical analysis of the music and career of Captain Beefheart

This sounded like a great idea and a brave concept by Chrome Dreams to produce a commercially available documentary about Beefheart. They are producing similar dvds about other bands, one about the Velvet Underground has also just been released. The benchmark for any Beefheart documentary would inevitably be the excellent BBC film by Elaine Shepherd. But that film is not available legitimately on dvd and due to lack of time she had not managed to interview as many Magic Band members as she would have liked.

When asked about what their angle would be Prism Productions told the Radar Station that they wanted “to appraise the music and the phenomenon that was the Magic Band, to look at the unique formal innovation that they brought to popular music and to address how much they have influenced future artists” rather than create another biographical overview of Beefheart’s career. This seemed a sensible approach. As did the fact that they intended carrying out new interviews with ex-band members and music experts. A small film crew travelled to the US to interview as many Beefheart-related people they could get to, including Gerry Handley, Art Tripp, Elliot Ingber, Moris Tepper and Gary Marker who would have a lot to tell and hadn’t been included in the BBC film. As it turned out they didn’t get to see Art Tripp. Potentially, though, this had the makings of something special and the Radar Station has been waiting with bated breath to see the results…

So, has this eagerly awaited film lived up to expectations? I think it’s a ‘yes’ and a ‘no’! The overall impression from long-time fans is that it has some great moments but ultimately it is a missed opportunity because it glosses over things and is too gimmicky for its own good. New fans intrigued about Beefheart’s music might be more interested in it and it does air some rare filmed footage of the band that non-collectors may not have seen before. The bottom line though is that’s it’s good to have documentary about Don and the band widely available.

Below is a more detailed review, filed by the Radar Station’s own Derek Laskie, which highlights some of the shortcomings of this documentary.

Captain Beefheart’s voice issues from a plastic model of a cheesy American television announcer’s head. Beefheart’s voice tells us that a squid eating dough in a polyethylene bag is fast and bulbous. The lips of the television announcer don’t move. This opening moment of a new DVD about Captain Beefheart sets the standard of the tastelessness and gimmickry which continues throughout the film. Got me?

Captain Beefheart Under Review: An Independent Critical Analysis is not “the ultimate review and critical analysis of the music and career of Captain Beefheart” which the marketing and packaging of the DVD suggests. This is instead a long, poorly-paced and ponderous film which consists mainly of anecdotes and opinions given by a motley assortment of Magic Band members and an ad hoc handful of pundits.

The film connects with Elliot Ingber in the murk of an underground car-park where he muses at length about his guitar part on ‘Alice in Blunderland’. This recollection is best summed up by the first sentence, “It was a little longer than what came out on the record.” Presumably the film is helping him make up for that lost exposure. Elliot sums up with this finely tuned insight, “I thought it did what it did.”

Another coup is an interview with Jerry Handley. He is seen enjoying a very large cocktail while he develops a description of the effect of hearing ‘Diddy Wah Diddy’. His conclusion is that it was strong, strong, “like a locomotive coming over your radio”, strong, “like a freight train coming through your speakers.”

This is hardly the critical analysis promised to us, nor is it typical of the level of articulacy among Magic Band members. I mention these two examples only to emphasise the voyeuristically compelling nature of this film. Much of it is like watching out-takes which have been left in.

John French, Mark Boston, Gary Lucas, Moris Tepper, Eric Drew Feldman, Ira Ingber, Doug Moon and Gary Marker are the other former colleagues of Captain Beefheart who appear. It is undoubtedly engrossing to listen to what each and every one of the Magic Band members has to say about their Captain Beefheart experiences, but what we ultimately learn concerns not so much the career and music of Captain Beefheart as their own characters and their roles in The Magic Band. Musicians Bill Harkleroad, Jeff Cotton and Art Tripp are among many other Magic Band alumni who might have had useful insights to share. They are not included here. Nor is Don Van Vliet himself.

The uncredited director of this film (I am told that Tom Odell is his name) induced most of his interviewees to be recorded in ridiculously contrived situations. John French takes a telephone call from a tree, Eric Drew Feldman drives a child’s toy fire engine and Gary Lucas is filmed in bed with a flashing blue night light. There are plenty more examples of Odell’s attempts to set these people up as a bunch of creative misfits, or as remnants of some wild and wacky-backy Beefheartian vision. This film is no art statement, this is goofy adolescent humour.

An interesting part of this DVD would have been the footage of performances and promos by Captain Beefheart and the Magic Band. Regrettably, every one of these clips is incomplete and the technical quality of the copies is poor. If the film-makers had sourced original material this would have helped, but these clips seem to be taken from somebody’s private collection. Many of these fragments of footage look like third or fourth generation video copies (the Ice Cream For Crow video, the German Beat Club ‘I’m Gonna Booglarise You Baby’, the 1980 French TV recording). These films are not “rare”, they have just still not been given a proper DVD release.

The Beefheart story is episodically told, album by album. As this unfolded, my astonishment that any film-maker could be so inept and clumsy increased more and more. There are inappropriate visuals (nodding donkey pumps stand in for phosphorous chimneys burnin’, a clip from the film ‘The Creature from the Black Lagoon’ accompanies ‘Electricity’), incorrect credits (‘Plastic Factory’ is captioned as ‘Dropout Boogie’) and sensational and irrelevant intercuts galore. When in doubt the director inserts exploding fireworks. He introduces most of the participants with customized audio and graphic effects which wreck any continuity and flow in the films narrative. Even the historic 16mm film footage of Captain Beefheart and his Magic Band playing on Cannes Beach in 1968 isn’t spared this director’s attentions. Most of the fragments he shows have had their colour replaced by a muddy sepia wash. Only one small piece remains as it was originally filmed.

The subtitle of this film is “an independent critical analysis”. Four “esteemed experts” were brought in to provide the “critical overview”. Professional music journalists and authors each one, three of them have not previously been noted for any significant contribution to Beefheart studies. Nigel Williamson and Clinton Heylin have both been used as experts in other music documentary DVDs made by this same film company, Prism Films. Alan Clayson has books and audio-books published by Chrome Dreams, Prism Films publisher. The core message about Beefheart from these in-house independent experts is that Beefheart’s music was based on the blues. Well shave me dry, boys. How could I have missed that?

You’ll find little in this film which has not already been covered in the BBC film, ‘The Artist Formerly Known As Captain Beefheart,’ or in the biography, ‘Captain Beefheart’ by Mike Barnes. Mike is the fourth expert featured here.

The film might appeal both to newcomers to Captain Beefheart and to fans long in the tooth who want to see what their old heroes look like these days. To anyone else, it must simply be a waste of time.