By: Graham
In: By or about Don Van Vliet
Tagged: Kevin Courrier, Steve Froy, Trout Mask Replica
With: 0 Comments 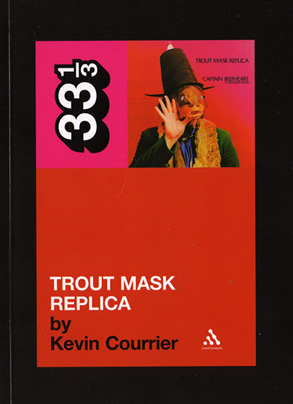 In the spring of 1969, the inauspicious release of Captain Beefheart and the Magic Band’s Trout Mask Replica, a double-album featuring 28 stream-of-consciousness songs filled with abstract rhythms and guttural bellows, dramatically altered the pop landscape.

Yet even if the album did cast its radical vision over the future of music, much of the record’s artistic strength is actually drawn from the past. This book examines how Beefheart’s incomparable opus, an album that divided (rather than) united a pop audience, is informed by a variety of diverse sources. Trout Mask Replica is a hybrid of poetic declarations inspired by both Walt Whitman and the beat poets, the field hollers of the Delta Blues, the urban blues of Howlin’ Wolf, the gospel blues of Blind Willie Johnson, and the free jazz of Ornette Coleman. This book illustrates how Trout Mask Replica was not so much an arcane specimen of the avant-garde, but rather a defiantly original declaration of the American imagination.

The 33 1/3 series is an interesting imprint. I believe the premise is that writers who have a passion about a particular album are given the opportunity to write about it. There’s a large number in the series and are generally of a high standard.

Regular readers of reviews on this site will know that we don’t mess about if we don’t like something and we get upset when facts are incorrect and old myths promulgated. It looks like Kevin Courrier was anticipating this and has tried to head us off at the pass because in the Acknowledgments chapter he writes:-

For those fans on Internet sites, though, who only crave “new information” (i.e. minutiae), or resent other informed voices who value digging intio the “nilly-willy” to get at the “nitty-gritty”, this book may not satisfy any fetishistic urges. I can only paraphrase Frank Zappa: information is not knowledge.

Yes, we collect information … and minutiae … but what we crave is the truth about what went on and not the same old misinformation bandied about. I like to think that we have made it possible for books like this to exist … and what’s more to be as well informed as it is.

Courrier has also covered himself by listing myself in the bibliography (as a ‘Beefheartologist’ … thanks, Kevin, I can live with that) for a piece included on my Frogseye site. The head honcho here at the Radar Station, Graham, also gets a listing and is quoted in the text. Unfortunately the third Radar Station mention is erroneous, the authors of the excellent 1997 interview with Bill Harkleroad, Alex Duke and Rob DeNunzio are not members of the Radar team. (But, hey, that’s me nit picking … again!)

So back to the book.

Because this is written as a personal passion the author begins by telling us how he came to hear and eventually love Trout Mask Replica. Sadly the circumstances are quite tragic and left me feeling a bit depressed. Perhaps not the best way to grab someone’s attention to read the rest of the book … but that’s his story and that’s how it happened and it must have strong personal resonances for him. The rest of the book, almost 140 pages, is more familiar ground.

Although the book focuses on Trout Mask what we have here is a concise history of Captain Beefheart and His Magic Band from Frank Zappa and Don Vliet messing around recording ‘Lost In A Whirlpool’ in 1959 through to Don’s departure from the music scene in 1982. It’s a journey towards Trout Mask, a detailed look at the rehearsing and recording of the album, an examination track by track, and finally, a brief run through of Don’s career subsequently.

The section that looks at each track is well done. It offers a brief description of the song, its structure and lyrics with additional comments gleaned from other sources such as Bill Harkleroad, John French and Beefheart biographer, Mike Barnes. No outrageous scenarios are offered for any of the songs, thankfully … (who remembers the awful ‘Tin Teardrop’ book!) … although there is a bit of a faux pas with the Moonlight on Vermont lyrics.

Underlying the story throughout the book is the love/hate relationship between Frank and Don. In fact it’s pretty much the framework of the book. There is quite a lot here about Zappa, the Mothers, Project/Object, the Bizarre/Straght labels etc. In fact I wouldn’t be surprised if Zappa isn’t mentioned as many, if not more times, than Beefheart. Courrier is obviously also a Zappa fan … he has written a book about him called Dangerous Kitchen: The Subversive World of Zappa … so perhaps sees Zappa’s role as more significant than some others would. (It’s an interesting area of discussion … how would Don have managed if Frank hadn’t been around to help him out on a number of occasions?)

For such a short book quite a lot of ground is covered – apart from a lot of Zappa, there’s John Coltrane, Cecil Taylor and other jazz players, and a lengthy piece about Blind Willie Johnson whom Courrier thinks Don is closer to in vocal style than Howlin’ Wolf. It’s well written and easy to read. And as far as I’m concerned there are no glaring factual errors … which is how it should be.

Well, okay there’s just a couple of niggles but nothing to get too upset about:-

Despite this nit-picking I’d recommend the book to long time fans as a worthwhile read, there’s no startling new insights but it will get you thinking. And for new fans it provides an excellent context to how this extraordinary album came about and perhaps makes it easier for Trout Mask virgins to understand what is going on.

Widely available on the Internet and in local book shops. It can also be purchased through the Radar Station’s Amazon associated book and CD store.