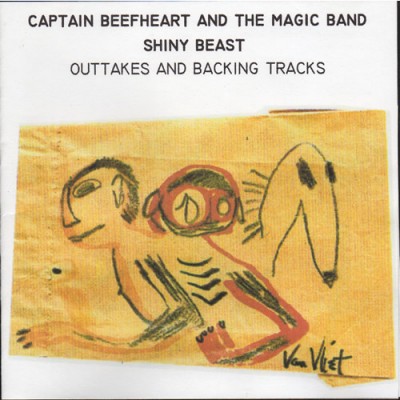 This two disc set is not a bootleg as such. I don’t think I’ve seen a copy of this being sold anywhere although I could be wrong. It is, however, widely available now from collectors and various torrent sites so there is no need to pay for a copy (unless, of course it ever gets a legitimate release).

Some of these tracks have been traded by Beefheart collectors as ‘Shiny Beast Outtakes’ for many years, long before torrents became the music trading application of choice. In particular … Suction Prints, When I See Mommy, I Feel Like a Mummy, The Witch Doctor Life and Candle Mambo have been available in vary degrees of quality … mostly fair although often at the wrong speed or very hissy. Their origin was almost certainly ‘reference’ tapes given to Magic Band members for rehearsal purposes.

One of these tapes surfaced recently along with a story from the guy who was given it:

I had heard of the “legendary” Captain Beefheart, but knew little about him outside that he was somehow associated with Frank Zappa.

One day in 1977 I met this guy at the record store I worked in (Robert
Williams) and he is bragging that he is the drummer for the magic band
and that Don had just dropped him off at our little record store in
the middle of the San Fernando Valley (Slipped Disc Records).

I told this guy to have the Captain come in the next time, thinking
that I was calling his bluff.

The next day I look up and this man is walking into the store and he
is radiating so much energy that you could tell that this had to be
“the Captain Beefheart”. Don was very friendly and spent the
rest of the day telling us stories about his life and selling records
to an unsuspecting public. He was really enjoying himself in an atmosphere
were nobody knew him (can I have the new Madonna single?).

He hung around until closing time when we all went down the street to
El Indio, an all night taco stand with a bar in the back. We drank beer
and ate tacos with Don while he continued telling us stories of Brian
Jones and life on the road with the Rolling Stones.

We heard the next day that Don came home so late that he had landed
in the doghouse with his wife and couldn’t go out to play with
us anymore.

After this I started going to the storage facility where the band was
practicing their new material. Sometimes Don was there other times just
the band. I did not fathom how lucky I was at the time.These are my
memories of an encounter with a magical person.

I have respected the wish that these tapes be private for over 30 years.

However this collection is a different beast entirely. All the tracks are in excellent sound quality and have obviously come from the Warner archives. There are two sets of tracks – one set are the backing tracks for the Shiny Beast album songs and the other is a collection of outtakes or alternate mixes of various songs from the album.

As with other backing track collections these recordings give us the chance to listen closely without Don’s vocal and marvel at all the intricate playing that is going on behind him.