[alert_box type=”info”]This review first appeared in the May 1999 edition of The Wire and was written by Byron Coley. Many thanks to Byron for his permission to reproduce it here, and for sending it along.[/alert_box] 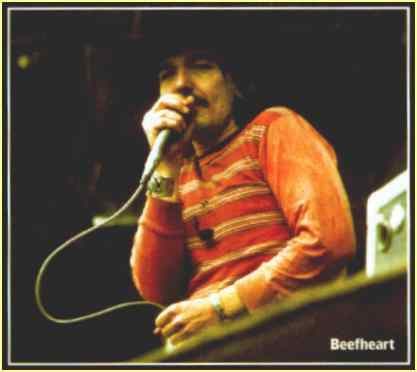 Although it was their third released album, Captain Beefheart and the Magic Band arrived with 1969’s sprawling Trout Mask Replica. The ability to appreciate its seemingly random, all-but-impenetrable 2LP length seemed beyond the ken of all but the most hardcore weirdos. Those who were able to decode Trout Mask felt that they had passed a grueling test. Few who were able to successfully complete this mission could resist the impulse to become missionaries of the Beefheart cause. The prevailing notion was that Don Vliet (as his mother knew him) had descended to earth from a planet very near Sun Ra’s, and that the music he and his band produced (a kind of stinging, avant-martian blues) was a result of a singular union of musicianship and artistic vision. This is certainly a true statement, although it is perhaps not accurate in the exact sense that many people once understood it. The exquisite Grow Fins set and its accompanying booklet notes by John French, together with Bill Harkleroad’s Lunar Notes memoir, present a new take on the history of Beefheart’s Magic Band. It is a version radically at odds with that of the doctrinaire fan-boys, but one no less amazing or compelling.

Grow Fins traces the development of the Magic Band’s form-destroyer-tendencies from their protean psychedelic garage-blues roots, into the unknown tongue-mastery of Trout Mask and beyond. The set’s main emphasis is on material from the period 1965-69, but few of the group’s remarkable turns are left un-noted. The first disc, Just Got Back from the City, presents some of the band’s earliest recordings. These sides occupy the same archeological strata as those of their A&M singles. By all accounts, the direction of this early unit was determined democratically. Don’s interest in the blues, and his comrades’ take on R&B, were fitted together and cemented with odd Stonesian paste. Acolytes will be blown away by the demos that guitarist Doug Moon has dusted off here. Others will probably be surprised by how “inside” they are. Rounded out by live blues choogle from the Avalon Ballroom and a too-speedy demo session for Safe As Milk, this disc demonstrates a band whose potential was somewhat muted by the fact that they were operating in the psych era’s space/time continuum.

The second disk, Electricty, is a wild, transitional work. Guitarist Jeff “Antennae Jimmy Semens” Cotton replaces Ry Cooder (who had replaced Doug Moon) and John “Drumbo” French is introduced as the band’s fourth or fifth drummer, depending on how you count. Both Safe As Milk and the first version of Strictly Personal had been recorded by this point and, with two original members gone, it is apparent that Don has become far more central to the music’s direction. The bulk of Electricty was recorded during the Magic Band’s first two trips to Europe. In early 1968 they went on a promotional junket, which included a legendary concert on the beach at the MIDEM convention in Cannes (the video of it is featured on the enhanced CD). Although they’ve complained about the equipment they’d borrowed from Blossom Toes, the band’s sound here has a beautiful limberness that beams the way toward things to come. Other tracks were recorded in Kiddermeister, on their second ’68 tour, immediately after Strictly Personal-proper was finished. Jeff and John had used their session fees to buy Don a soprano sax and he whips it out hard. Whether or not he had any idea what he was doing, Don’s lung capacity was so massive that his extended reed discharges add an insane flavor to the proceedings. Amongst the rambling desert blues improvisations, his keening-goat hornwork is as striking as the sweet beller of his voice and harmonica. Zappa’s contention that the band’s music was a collision between free jazz and delta blues was never truer than it is here.

The next two disks, both called Trout Mask House Sessions, will be the most revealing to those steeped in Beefheartian lore. By this juncture Bill “Zoot Horn Rollo” Harkleroad and Mark “Rockette Morton” Boston had arrived, supplanting the last remnants of the original band. Isolated in a house in Woodland Hills, this new Magic Band attempted to give shape and color to abstractly three-dimensional piano improvisations that Don whacked out in short spurts. These rehearsal tapes, and the notes, suggest that Trout Mask was not exactly the headbirth some have claimed.

By the time the album’s basic tracks were laid down at Whitney Studio, in a precise 4-1/2 hour gush, the material had been learned, re-learned and tinkered with to an incredible degree. The music and chatter on these CDs, although bathing the process of Trout Mask in new X-ray light, actually make the results appear even more monumental. To think that these fractured miniatures of almost torturous complexity could evolve into the holistic otherness of Trout Mask buggers belief. But here’s the goddamn proof. Actual human beings spent months of agonized labor to create this pocket universe – a jagged landscape of alternating hilarity and aridity which operates entirely by its own logic. Hats off to ‘em all.

The final disk, Grow Fins, is a miscellany recorded in Trout Mask’s wake. There’s a track from the 1969 Actuel Festival (with Zappa on guitar), two tunes by the superb Lick My Decals Off band from Detroit’s Tubeworks television show (also on the enhanced CD), and various dribbles of all sorts. Some of it is incredibly instructive (like the piano and guitar work tapes for “Evening Bell”), some of it is just incredible.

Heard in part or examined in whole, Grow Fins is a breath-taking document. Even though he has been retired from music for over a decade-and-a-half, despite the fact that various former associates have accused him of power trips most foul, Captain Beefheart’s music remains its own cutting edge. Beefheart and the Magic Band, together, created a music so powerful and unique that it has expanded subterranean horizons in ways that we haven’t yet discovered.