Messin’ with the Kid by Benjamin Horrendous

By: Steve
In: Related releases
Tagged: Spotlight Kid
With: 0 Comments 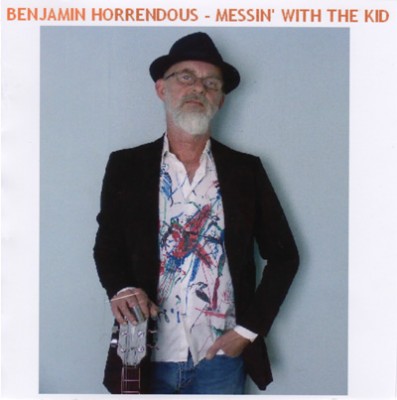 Benjamin Horrendous will already be known by many as a member of the Beefheart tribute band, The Fourfathers, who have privately released a number of albums of Beefheart covers interspersed with some of their own material.

However, this time Ben has decided to go solo, just him and guitar (and some foot stomping on Alice) and to give each of the Beefheart songs his own personal arrangement.

Ben is channelling the blues greats in his refreshing interpretations of the whole Spotlight Kid album. His voice growls from his boots and his slide guitar playing is precise and spot on.

He’s obviously having a lot of fun here. Each song is placed in its own new blues setting giving a fresh perspective on these songs we all know so well. In fact, a couple of these, White Jam and The Spotlight Kid, have not been covered before (as far as I know … at least I’ve not heard any versions before).

This album is foot tappingly good … great fun … and gets even better with repeated listenings.