A Giraffe is Listening to the Radio is a collection of Beefheart songs recorded in rehearsal and performance during 1979 and 1980. 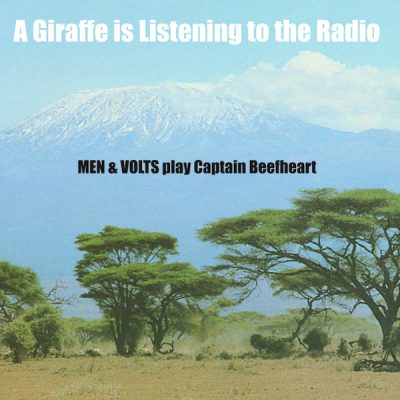 Men & Volts recordings of Beefheart songs have become almost the stuff of legend, we knew they were out there but no one seemed to have heard them. Some cassettes and later some CDRs were made available discreetly but not released on a label. I missed out on these and have kicked myself about it ever since.

What we have here is a small selection of songs released on vinyl in a limited edition of 300 copies, thanks to Bryon Coley who bugged David Greenberger until he handed over some of the original recordings.

Phil Kaplan loved Beefheart’s music and wanted to learn to play it himself and with this aim in mind in 1979 he got together with a some other like-minded musicians. They rehearsed and rehearsed and even played some live shows as a Beefheart tribute band but soon found the opportunities were limited. By 1980 the band decided to move on from just playing Beefheart and to start writing their own material. Check out their albums and you’ll soon notice the Beefheart influence though.

A Giraffe is Listening to the Radio showcases the band’s grasp of these Beefheart songs pretty well. Don’t expect anything different here, they were not into rearranging the songs in any way. But what you do have are some fierce well played versions which include a rarely covered version of The Spotlight Kid.

The raw sound quality gives an extra edge to the music and is highly listenable.