By: Derek
In: Life, Tributes
With: 6 Comments 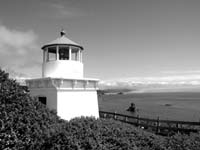 “Captain Beefheart is the shingle that gave me shingles,” complains Don Van Vliet in Lars Movin’s gentle evocation of Don’s life and circumstances since he became a full-time painter. “It makes me itch to think of myself as Captain Beefheart. I don’t even have a boat!”

I don’t even have a boat – calling the Captain is a charming misty travelogue of the road leading to the place where Don Van Vliet has found himself as a painter, and the shoreline – land, sea and sky – which Don inhabits and describes.

Waves lap, seabirds dry their wings, fishing boats bob and seals bask as Don describes his neighbours, the redwoods, and the time he saw thirty six whales from his window. Don chooses to live in this secluded place, away from people, and explains, “I find isolation better, because of the fact that I can paint … Essentially, I just like to paint.”

In 1991 Lars Movin recorded a telephone interview with Don Van Vliet, publishing a transcript in the fifth number of Copyright, a now defunct magazine. It is an edited tape of this interview which provides the soundtrack to Lars’ film, or video notebook as he calls it, which was shot close to Don’s home in July 2005 and premiered in Copenhagen in May 2006.

“Can you imagine that, having somebody look for you?” asks Don, as he tells the story of how the last time he went out he’d met some music fans hunting for their hero . That was five years previously. The memory of how these deadheads had approached him at the Coop and asked him if he’d seen Jerry obviously still appalled him.

Don’s voice as he recalls the deadhead episode, “Have you seen Jerry?” is so sneering and disdainful of both obsessive fans and of Jerry Garcia, that he repeats the phrase for the full majesty of the effect. When eventually the words “Grateful Dead” are uttered, the film cuts to the floating corpse of a bird in the sea.

Although Don speaks in this film with careful articulation there is little evidence of the later change in his voice which became so noticeable in the Stand Up To Be Discontinued CD or in the Anton Corbijn film Some Yo Yo Stuff.

Don’s remark about having shingles (a pun on the word meaning sign and the medical condition) was a joke he’d been making since at least 1980 when it was reported in Rolling Stone. His follow-up lines, which the film’s title is taken from, seem to be more recent.

At under 16 minutes this video notebook is both short and sweet. Humourous touches abound, both in the original interview and in the editing of the visual material. I don’t even have a boat – calling the Captain will be of great interest to Captain Beefheart afficianados everywhere.

Another showing of I don’t even have a boat – calling the Captain is being held as part of a programme of Lars Movin’s video notebooks at The Danish Film Institute in Copenhagen on January 10th. A transcript of the film soundtrack is available at Lars Movin’s website.