Harry Duncan was not strictly speaking a member of the Magic Band but he was Don’s manager from 1976 to 1978 and did perform on stage with them. He played additional harmonica on “Grow Fins”, and would recite a version of “The Blimp” while wearing a mask. 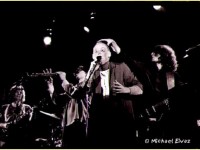 No information available about what he’s been doing since then, although he did host a music show on KUSF fairly recently