A selection of tracks that helped mould the avant-garde sounds of Beefheart including some from The Man himself. 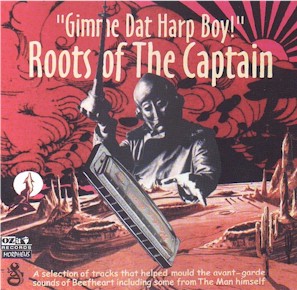 From the back cover:

“Gimme Dat Harp Boy presents a broad slice of
American music from the 20’s through to the 60’s. This music contributed
to the heady mix that manifested itself partly in the blues revival
of the early 60’s and subsequently in the sounds of the psychedelic
years. One of the few artist to combine these influences along with
his own genius into a wholly satisfying and individual musical art
form was Don Van Vliet aka Captain Beefheart.”

As can be seen from the track listing this is not a direct linking of specific Beefheart tracks to their original recordings (except in a couple of cases) but more of an impressionistic look at the blues and some of the oddities of the jazz, jump and rock ‘n’ roll genres to give a feeling for the influences that were out there in the ether for the the young Donnie Vliet to soak up.

A great cover plus a 12 page insert with many pictures of the performers featured and a short piece about each track (which, annoyingly, are not in the order that the tracks appear on the CD!)

BUT … why did they feel they had to include three out-take tracks from the ‘Spotlight Kid’ sessions which really add nothing to the purpose of the CD. Also, the first track has been nicked from Zappa’s ‘Mystery Disc’ and the ‘Poem’ is actually a badly edited snippet of a live Old Fart At Play.