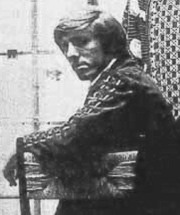 Often mis-spelt as Jerry, his first name is Gerald, so Gerry would the correct form.

Only in the band for a matter of months Gerry McGee did have a significant impact on the future playing of the Magic Band. Coming from a country music background he played with a strong finger picking style using picks on fingers and thumb.

He’d been doing session work (appearing on The Monkees first album) and playing in clubs around Hollywood. Gerry can’t recall how he came to be in the Magic Band, although it’s likely that he was called in by Bob Krasnow who knew him from session playing. He replaced Ry Cooder (who had left after the Mt Tamalpais Festival debacle) and did play a couple of live shows fitting well with the ‘bluesier’ side of the band.

Gerry told the Radar Station “I did like the ‘blues style of’ Don Van Vliet. But he did get too strange for me later! Fun for a while though!.”

He moved on when he realised he couldn’t work with Don and wasn’t interested in playing some of the ‘stranger’ music that was being developed.

Gerry has continued to be a well respected session guitarist and has toured with many of the big names on the music scene. He was touring right up until his death when he collapsed on stage in Japan with a heart attack in October 2019.

In memory of Gerry John French wrote the following on his Facebook page:

he was a member of CB&HMB for a short time. He replaced Ry Cooder, who left the band after the Mt. Tamalpais incident in which Don walked off stage shortly after the intro of the second song, “Electricity.” Bob Krasnow told Don and I the NEWS at a meeting at Buddah Record’s offices — just walking distance from A&M Records — on Sunset Blvd. He mentioned a couple of guitarists: one of which was Gerry McGee, who, at the time was working with the house band in a strip club on La Cienega Blvd. Don and I went there ( even though I was underage) and listened to him play. We both agreed he was great and met him at the break. He was a family man, and Buddah had to pay him a weekly paycheck in order to procure his services. Jerry and Alex really liked him right off. Our first rehearsal was in the old Laurel Canyon house on Amor Road. I noticed right away his country influence and finger-picking techniques. A couple of years back, I called up Gerry and told him that he had been an incredible influence on the development of the music, and that “Flower Pot” — a song from the “Mirror Man” session — had been inspired by his played. Alex Snouffer picked right up on his style and studied it. Though Gerry didn’t play bottleneck ( that I ever heard anyway) he had the delta blues feel right off because of his roots; born and bred in Louisiana. His father had been a Cajun fiddle player ( this according to Jerry Handley) and had been a big influence in his musical development.. Gerry’s influence in the band can be heard on every album post-SAM, as his finger picking techniques were employed by every guitarist in The Magic Band. Besides that, he was an all-around great guy.

More information about his career can be found in his biography on The Ventures website.