Gary Lucas on Lick My Decals Off, Baby

I’ve already written extensively here about Van Vliet’s second album “Strictly Personal” https://bit.ly/37SN3Rl —
And as Don’s third album the magnum opus “Trout Mask Replica” has been so thoroughly dissected and worked-over by so many minds over so many years, I’d rather move on to greener pastures; to whit (and now we come to the pay-off mix) — No. 2 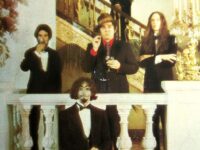 Wherein Bill Harkleroad (Zoot Horn Rolo) is officially credited on the lyric sheet as Musical Director (Don: “Well I had to give him something to do”). Along for this wildest of all Beefheart rides this time out is Mark Boston (Rockette Morton) on bassius ophelius, and the double percussion attack of John French (Drumbo) on drums and Artie “with the green moustache” Tripp (Ed Marimba) on drums, marimba and percussion.

On the surreal one minute black and white tv advert for the album Cal Worthington or someone like him (a used car salesman in the LA area) intones “New on Reprise! It’s Lick My Decals Off, Baby”–and what’s in a name? (Don: “I was saying get rid of the labels coming, children”. Oh).

Opening in medias res with the title track, an impetuous but insistent happy-go-lucky slide guitar theme announces itself bang! over a clattering percussive racket, then the band dives straight on into a lurching, stumbling bluesy groove of down ‘n dirty guitar and bass plucking under-girdled by the sound of pots and pans banging and a rock steady high-hat pattern underneath which rapidly accelerates (Van Vliet’s alternative title: “Switchman with Parkinson’s Disease”), as Don begins to declaim in his famous growl a kind of answer record to the Beatles first American hit: “Rather than I wanna hold yr hand / I wanna swallow you whole / ‘N I wanna lick you everywhere it’s pink / ‘N everywhere you think / whole kit ‘n caboodle and the kitchen sink / whole kit ‘n caboodle and the kitchen sink”. The unison ensemble work is stunning throughout the album–what can I say? As tight as modern classical music– think Boulez’s “Le Marteau sans Maitre” (except here Van Vliet is both Hammer and Master). After some furious time changes the Magic Band shifts gears into an almost Raymond Scott-like “Powerhouse” groove as Don sings: “And the earth all goes down on their knees / lookin’ for a little ease / She stuck out her tongue ‘n the fun begun / She stuck out her tongue ‘n the fun begun / she stuck it out at me and I just thumbed my nose / and went on washin’ my clothes”. YEAH!! I cited this particular lyric in one of the last papers I wrote while an English Lit student at Yale–and I didn’t flunk out! (Existentialism in a nut-shell).

The album just gets better and better from that point on. Next track up, and the Jaws of Hell open before you sucking you down into the whirling vortex of “Doctor Dark” (played once upon a time by New Haven DJ Bob Dark on his WPLR radio program, (ain’t that right Dominique Lunau Avery?): “Mama Mama here come Doctor Dark / His horse clickin’ clackin’ and his old hooves makin’ sparks.” There is a Tutti instrumental passage in the middle of this number that is simply breathtaking. I mean King Crimson is great and all (I’m a big fan of their first couple lps) but this is the REAL White Magick…and the beauty part is they (Don and the boys) could pull it off live on a good night.

In early 1971 after this album was but a cut-out for $1.97 at Cutler’s Records I drove down from New Haven for Beefheart’s debut show in NYC at Ungano’s on the Upper West Side with my pals Robert Melvin Rubin and Stephen Hendel…and that show changed my life (and changed it way for the better, je ne regrette pas). There’s so many other goodies on this opus, all immaculately played and sung including “I Love You, You Big Dummy” (later covered by Magazine, but hey it’s awfully hard to cover any of these songs trust me), “Bellerin’ Plain” (my absolute favorite, especially the marimba/guitar duet in the middle), and the ne plus ultra-warp-speed album closer “Flash Gordon’s Ape”: “Pull back the adhesium tape / Yr in a scrape / Take to yr trees / There’s no escape / The leaves are getting faker every day / The leaves are getting faker every day / Flash Gordon’s Ape / You’re Too Day”. Fake Plastic Trees indeed (and where’d that title come from?). Think Ronnie Raygun (the Magic Band came onstage at Ungano’s firing rayguns at each other). Think Trump’s “Space Force”, and “Super Duper Missile”. Then think about the fact that there is currently not any physical CD representation of this album in the good ole USA unless you shell out 40 plus bucks at Amazon… “I may be hungry / but I sure ain’t weird.” Lick my decals off, baby!