Gary was the drummer in the Magic Band from mid 1976 through to mid 1977. According to John French’s notes in the Grow Fins booklet he came into conflict with Don and quit the band just before a short tour of the Pacific North West coast. (John was asked to rejoin the band again to replace Gary, which he did).

In his book John recalls seeing Gary perform with the band at the Troubadour and he wrote that “I was really impressed with [his] mastery of the beats and thought he was a great player”.

Gary did not record with the band although recordings of a couple of shows featuring him have surfaced over the years. 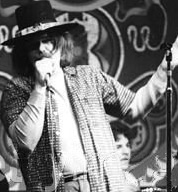 Here is a rare photo of Gary who can just be glimpsed behind Don (probably taken at the Troubadour in 1976).

Born in Los Angeles in 1954 Gary passed away in October 201, survived by his wife Hilary.

We have no information about his subsequent career after quitting the Magic Band although in recent years he lived in North Carolina and had trained as an Emergency Medical Technician.

He was apparently still a keen drummer and had taught many people to play. He had also done some post production work for television and videos.