By: Derek
In: Magic Band people, Tenuous, Tributes
With: 4 Comments

A benefit concert for former Mother of Invention and Magic Band member Jimmy Carl Black has been arranged for November 9 at Bridge House in London. Jimmy recently underwent an operation for lung cancer in Germany and the proceeds from this event will go towards his expenses. Among those appearing will be Zappa and Beefheart cover band The Muffin Men and Zappacademic writer Ben Watson. Tickets cost £20.

The Muffin Men are contributing to several other JCB benefit gigs. The first of these is Stockport For Jimmy – Indian Aid on Sunday October 26, 4-8pm, Bakers Vaults, on the Market in Stockport. Like A Concert For Jimmy, this gig was approved and sanctioned by Jimmy personally. Tickets are £10, limited to 100. Contact arnie.furniss@hotmail.co.uk
More information from The Idiot Bastard (who also lists Jimmy Carl Black CDs for sale). 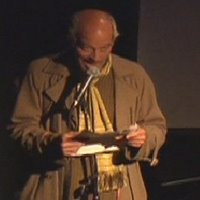 Jamie Cohen, a popular music industry mover and shaker, artist, performer and poet suffered a heart attack and died on September 11. He was 55.

As a student at Syracuse University in 1975 Jamie encountered Don Van Vliet at a press conference given by Frank Zappa to promote the Bongo Fury tour. Jamie’s verbal exchange with Don can be heard at Gary Lucas’ website.

Jamie’s interest in the work of Don Van Vliet continued throughout his life. At his MySpace page Jamie wrote, “Don and I have a very bizarre relationship going back to the mid 70’s, But that my friends is another story.”

Jamie’s reading of the Don Van Vliet poem Hollow Smoke was one of the highlights of Beefheart Night at the Knit in April. According to his partner Donna Love, Jamie was quite proud of his reading, and also proud that his reading made Dusty Wright’s cut for the vidcast at Culture Catch.