By: Derek
In: Life
With: 2 Comments 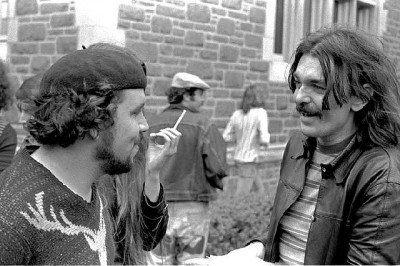 Frank Xavier Weyerich’s photo of two whiskery gents in convivial conversation will be familiar to anyone who has ever done an Image Search for Beefheart.

Who, I wondered, is that other chap, and what was he talking about with Don? The website hosting the photograph (thank you Webster70.com) led me to an email address for somebody called Tom Ray.

Ray, who is now owner of one of the largest independent record stores in the American Midwest – Vintage Vinyl – kindly wrote back with the details of his meeting with Don, correcting me on where it occurred.

Yes, I had that pleasure back in the middle 70s—but it wuz @ Washington University. I recall Beefheart had a great swing style clarinetist w/ him on the set.

By this time I had been a Beefheart aficionado since the middle 60s—first time I heard him was in my grandfather’s car, driving in Georgia, and I heard ‘Diddy Wah Diddy’ and was totally transported. I had no idea who this was, but the sound coming out of the radio grabbed me. All his releases were great mysteries and wonder for my ears from that moment on.

I recall in 1970 thinking Lick My Decals the greatest music being made. So, to meet him finally was, well—I don’t think there was anyone in the world I would have rather met.- He was wonderful and sweet, playful and full of verbal tricks. We talked about Howlin Wolf and Ornette Coleman, and he inscribed my copy of Trout Mask w/ some of his lyrics….what a day. A real blessing.

Tom Papa Ray hosts a radio show playing “deep soul and contemporary blues” which you can listen to at community radio station KDHX. He’s also known as a rather accomplished blues harpist.

My thanks to Tom Ray for his help.