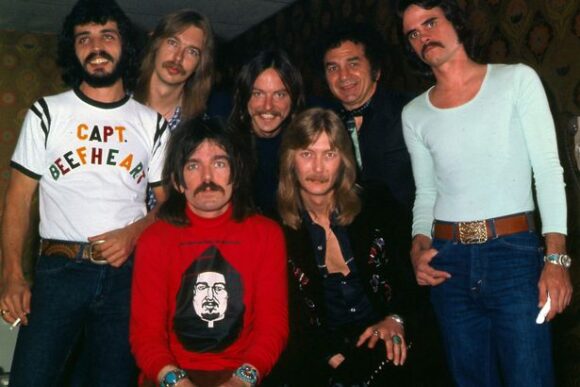 When the Magic Band decided they’d had enough and left Don high and dry in March 1974 (or, according to another version of the story, were fired by Don) just weeks away from a US and European tour I doubt they realised who would take their place (not that they particularly cared!).

Brothers, Andy and Augie DiMartino, were managing Don and pushing him (albeit willingly) into a more commercial style of music. But, give them their due, at this time of crisis they acted quickly to get a bunch of musicians together to form a ‘Magic Band’ so the tour could go ahead. A couple of guys from the soft rock band Buckwheat (also managed by Andy DiMartino) and some session players were drafted in with the daunting task of learning the Beefheart song catalogue in a short space of time – days, according to legend, weeks according to Michael Smotherman! Little did they know what they were letting themselves in for, as most of them hadn’t even heard of Beefheart let alone conversant with his music.

It wasn’t long before they became known as the ‘Tragic Band’ by hardcore fans. Although they were perfectly competent musicians they had no feeling for, or understanding of, Beefheart’s music as played and recorded by earlier Magic Bands. Many fans who went to see the Magic Band live felt cheated that there were impostors on stage. Despite this Don carried on with as much good humour as he could muster, defending the band during interviews and appearing to enjoy himself at times on stage.

Even though the band were criticised for their easy listening approach to the songs, smoothing over the jagged rhythms that were the Beefheart trademark sound, they do seem to have made the music more palatable to some people. There was definitely a market for bland no nonsense boogie based riffing at the time. On many of the tapes of 1974 shows the audiences do appear to be enjoying the music!

The material played came mainly from the Unconditionally Guaranteed album with a couple of Beefheart classics, ‘Crazy Little Thing’, ‘Abba Zaba’ and ‘Mirror Man’ thrown in too. One of the highlights of the shows was a lenghty blues workout, often known as ‘Keep on Rubbin’, based loosely on Guitar Slim’s ‘Mighty Crazy’; one of the low points was an instrumental of ‘Sweet Georgia Brown’ – often played twice!!

The band performed two songs live during the UK tour on the BBC’s Old Grey Whistle Test (another song, ‘Peaches’, from the Manchester show was also broadcast) and a complete concert was recorded for French television (which ends with the drummer kicking his drum kit all over the stage).

Two of the Tragic Band concerts have been bootlegged – Crazy Little Things and London 1974. Two tracks from the London show have also appeared legitimately on the 1974 Virgin double vinyl sampler ‘V’.

Michael Smotherman got in contact in 2005 to put across his perspective on the Tragic Band era.

Soft West Coast rock band with male/female vocals of mostly self-penned originals and some fine guitar playing. Michael Smotherman plays on all the albums. Dean Smith on ‘Hot Tracks’ only.

Besides being in Buckwheat and his solo career Smotherman has also played with Glen Campbell and Steve Earle.

Originally from Texas before moving to LA, Ty Grimes played in a number of bands, including The Triangle, a guitar, bass and drums trio, described as ‘Texas psych with an undercurrent of soul dominated by blazing fuzz and slide guitars’; Angel & Lataigo (no information about these). He then joined former teen idol turned country rock singer Rick Nelson as drummer for his Stone Canyon Band.

Ty turned up on the Zappateers site some years back and spoke briefly about his time with Beefheart:

I am Ty Grimes , I did play with Beefheart , live from London . [ … ] The problem was crappy songs , most were written by his manger Andy DiMartino , who was NOT a song writer or record producer . Management and record co. INSISTED we only play those songs . The fans hated it !!! and so did we , thats what we did on the U.S. tour . We had 6 days off and then started our tour of Europe . During that time Don and I got the band together and worked up his older stuff , we were ready for Europe ! We did not tell DiMartino . First gig in London we did the NEW show , the fans Loved it ! DiMartino Flipped Out , Don And I told him to F–k off , people come to hear Beefheart not you . We did do some of the new stuff because Richard Branson DID insist, but we did our arrangements . Watch the Live from London video , we were kickin’. It was a very good band , we did the best we could with what we had to work with . When we were recorded live we Had to play that show because the record co. demanded it . That’s what they were promoting ! On un recorded shows we got to do what we wanted . This is the REAL story ! Thank you all for caring , Ty Grimes

He was part of Bobbie Gentry’s touring band from 1971 to 1974 as well as working as an LA session player.

After the Tragic Band tour he went on to become bass player for Dolly Parton and later The Oak Ridge Boys and then back to Dolly. He played on a number of albums with these artists and toured extensively with them. He recorded an album of southern rock with some other Nashville professionals in the band Bandera. He is now teaching in a college in Nashville.

Thanks to reunion Magic Band drummer, Michael Traylor, for additional information. Coincidently, he and Paul grew up in the same area of Florida.

Originally born in the UK but moved to the US when still a small child, Fuscaldo was guitarist for Curtis Mayfield, and Baby Huey & The Babysitters.

The following information was sent to me by Charles Tiede, for which I’m very grateful as I’ve been unable to track down anything myself :

Fuzzy played guitar with The Mauds a Chicago white soul group that had several regional hits including “Knock on Wood”, “Hold On, I’m Coming” and “Sergeant Sunshine”, “Soul Drippin’”. They were in the same era (mid to late 60’s) as the other Chicago rock bands that had regional and occasionally, national airplay…Cryan Shames, New Colony Six, Shadows of Knight, American Breed, et al….

Jim Pankow, Lee Loughnane, and Walt Parazaider (later of CTA and Chicago) did studio horn work for the Mauds.

I saw the Mauds in concert a couple of times when I was growing up and an aspiring rock and roller. Fuzzy had some good chops and played a cherry red Gibson ES, and I remember thinking that he was about as cool as one could get. The Mauds were fronted by a singer named Jimy Rogers who has put together a new group he calls the Mauds and they still perform in the Chicago area.

I was an enthralled 14 year old kid watching him at the Sheboygan, WI Armory, a big old barn of a place where all the Chicago groups performed at one time or another…

Born in 1923 he has played in many bands and with many well known names, such as Glenn Miller, Charlie Parker and Johnny Long. He has also fronted his own jazz, dance and show bands, as well as being a teacher. The only definite recording of his I have come across is a 1972 single (distributed by London the same label as Buckwheat) that shows an earlier connection with one of the DiMartino brothers and probably helps to (partly) explain his inclusion in the Tragic Band.