The end of the Reunion

On 15 December John French posted this on The Magic Band Facebook page:

I have decided not to pursue any more tours. There is precious little demand these days, and not enough offers to actually support any group. I have sincerely enjoyed the actual tours, but the five to six months leading up to them is filled with tedious details. Too much time is spent on the business and not enough on the music. Since I founded the whole project in 2002, the difficulty level in putting a good tour together has increased exponentially. I have decided, since gaining recognition in Rolling Stone Magazine as “#48” of the top 100 drummers, to pursue the idea of conducting drum clinics. This is something that I can do independently and will probably enjoy immensely. Thanks for your interest and support through the years.

This probably doesn’t come as a great surprise to some of us, especially those who have spoken to John behind the scenes over the years.

I remember the excitement about the project when John first mentioned it to me back in 2002 and I encouraged him to do it as I was certain there were plenty of fans out there who’d want to hear Don’s music played live again. However for some reason US venues were not willing to book the band which made it very difficult for them to make reasonable money from touring. The UK and Europe were lucky to see them visit many times but even here venues began ignoring the band. Sadly it has become harder each year for John to put together a profit-making tour. It was only a matter of time before he would have to call it a day.

In its 14 years of existence the band underwent a few changes of personnel but never lost sight of what it was doing … playing Don’s music with precision, enthusiasm, passion, humour and respect.

Thanks to Mark Boston, Gary Lucas, Robert Williams and Denny Walley for donning their Magic Band personas once again. Thanks also to Michael Traylor, Craig Bunch, Eric Klerks, Andy Niven, Max Kutner and Brian Havey for taking the time to learn all that stuff and carrying the flame for a younger generation of Beefheart fans!

But most of all a big thanks to John French for all his efforts in planning the tours as well as his work on stage, and, of course, off stage patiently taking his time talking to all those wide-eyed nutjobs. Thanks for keeping Don’s music live … and making one hell of a lot of old farts very happy indeed.

My brother took the picture below at the band’s last UK gig at Under The Bridge in July 2016. When he showed it to me then we both thought it was somehow prophetic… 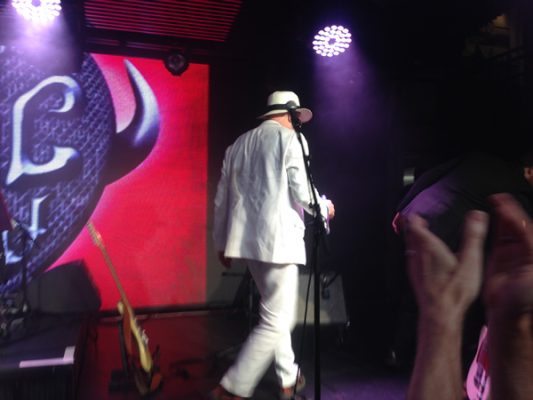