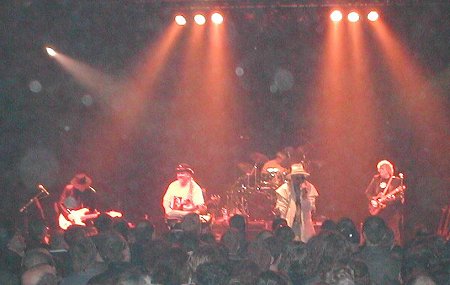 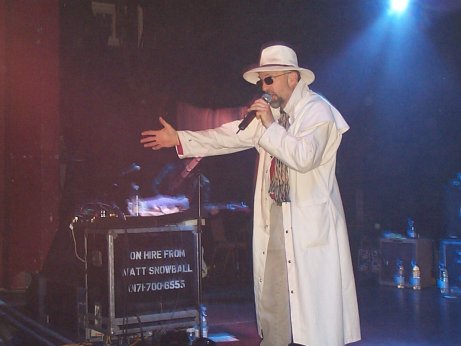 I didn’t like this place. The bouncers searched us roughly on the way in; then, after finding a table to sit at, we were constantly harassed by cocktail waitresses, hassling us to buy overpriced drinks. All this just lowered my opinion of Richard Branson and Virgin, who owned the place, even further. It was a bit of a shock to see Beefheart when he came on. He’d aged a lot in 5 years, and had a kind of world-weary resigned air about him. Instead of the grand entrances of old, he just ambled quietly on stage. The first thing he said to us was “I END_OF_DOCUMENT_TOKEN_TO_BE_REPLACED

This was the same year as Knebworth; same line up and similar set. I was pleased cos I’d managed to persuade 23 friends to come, and we were sitting together in 2 rows near the front. During the interval I caught sight of Beefheart walking behind the curtain at the back of the stage. I jumped up and shouted out. He stopped, turned, looked right at me, smiled, and gave a very slow deliberate wave. This made my night. The music was absolutely brilliant; similar to Knebworth but tighter, although Beefheart seemed preoccupied and worried about something. Several times during the set he threw the END_OF_DOCUMENT_TOKEN_TO_BE_REPLACED

Pink Floyd were headlining. Other acts were Roy Harper, Steve Miller Band, and Linda Lewis, who’d had a big hit with “it’s in his kiss”, though I swear she sang at Knebworth “it’s in his thing”. Beefheart was introduced by John Peel with the words “Here he is, the guv’ner, Captain Beefheart!” The drums beat a couple of times, and they launched into a gloriously lurching, cacophonous version of “Moonlight on Vermont”. There were two distinct reactions from the audience. The Pink Floyd fans put their hands over their ears and looked at each other as if to say “What is this shit?!”. The Beefheart END_OF_DOCUMENT_TOKEN_TO_BE_REPLACED

I had bought the tickets well in advance, and was eagerly awaiting the gig. We heard shortly before the gig that the band had quit, but the tour would still go ahead, so we were unsure what to expect. All credit to Beefheart and the band for putting together a show in such a short time, but what we got was a competent rock band, that tried their best, but they just weren’t “magic”. The support band was Henry Cow, whom I liked, but most of the audience were restless, and talked through the set. The biggest cheer they got was when someone threw a END_OF_DOCUMENT_TOKEN_TO_BE_REPLACED

The line up was the same as the Brighton ’72 gig except for Alex St Clare instead of Winged Eel Fingerling. The concert started with Rockette Morton with an electric toaster straped on his head. He said, “Good evening. My name is Rockette Morton. I’ve just come on to do a toast.” Then he leapt into the air and played a short free form solo. He went into the riff from Mirror Man and the band joined in. Beefheart came on playing the harp and exhorting everyone to their feet. Hundreds of people left their seats and ran to the front of the stage. It END_OF_DOCUMENT_TOKEN_TO_BE_REPLACED

I was 17. I’d been a fan for 2 years and had all the albums, but this was to be my first (and best) concert. I travelled the 25 miles to Brighton on the back of my mates Yamaha 100 motorbike. The first thing I remember is all the weird and wonderful characters in the audience: people with plastic ray guns, someone had an inflatable robot, and one guy was dressed up like the Trout Mask sleeve, complete with shuttlecock. The support band came and went. I can’t remember anything about them. There was an air of excitement and anticipation in the hall that was END_OF_DOCUMENT_TOKEN_TO_BE_REPLACED 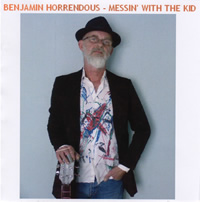 I have great respect for anyone who attempts to cover any of Beefheart’s songs. So what do you say when someone decides to cover a whole Beefheart album! Well, that’s just what Benjamin Horrendous has done. Singlehandedly, he’s (in his own words) ‘messed’ with each song from The Spotlight Kid to come up with his own vision of this great album. Find out more about it at Benjamin’s site. END_OF_DOCUMENT_TOKEN_TO_BE_REPLACED