[alert_box type=”info”]Article taken from Volume 13 #1 of Cover Magazine (March 1999). Many thanks to Brian Smith for kindly sending me a copy of the magazine.[/alert_box] 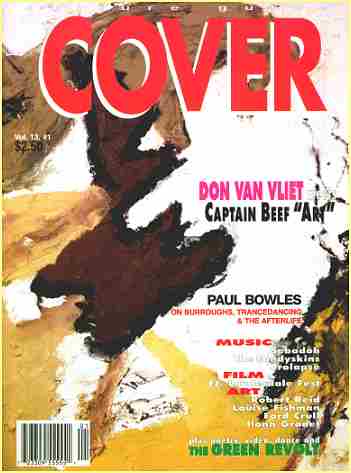 Don Van Vliet; poet, musician, composer, anti-rockstar, aka the legendary Captain Beefheart, has been off in the wilderness making pictures since the early seventies. Exhibiting his paintings under his own name since the early eighties, his most recent work was shown this winter at Knoedler & Company, in association with the Michael Werner Gallery.

What has been said in the past about his work as a musician and poet, namely that it is visionary and apocalyptic, is also true about his work as painter. Poet John Yau writes “In this time [where] it falls to artists, writers, and musicians to reveal the myriad ways in which the world exists beyond our understanding, Van Vliet is a truly rare phenomenon.”

Throughout his musical career, beginning with the 1966 recording of Safe as Milk, Van Vliet’s compositions and performances were generally considered to have taken rock music to a level of serious artistic expression not before envisioned or attempted within the genre, permanently altering the way of making and hearing contemporary music. The Rolling Stone magazine called the 1969 recording Trout Mask Replica “most astoundingly influential and enduring”

As a composer / musician Van Vliet used the simpler musical forms of rock and blues as a jumping off point to develop new music in a manner similar to free form jazz masters Ornette Coleman and Albert Ayler. This is precisely what he does in his painting. Working in the style of the abstract expressionism, the blues of the painting world, he found a visual language that allows him to develop his unique narrative voice.

Drawing from the natural, and supernatural, for his imagery, he uses primitive stylized animal figures and abstract signs and symbols to make his spidery compositions. With a fairly limited palate, mostly yellows, browns, blacks on fields of white, the paint is applied liberally with a sense of freedom yet in a very exacting manner.

His work evokes the power of the New York School painters from the fifties; the rich emotional narrative of Rothko, the passionate painterliness of de Kooning, and the visual force of Pollack; and brings to mind the encoded dance of mathematical formulae in Cy Twombly’s work. In discussing the work of Van Vliet and Twombly, John Lane, past director of the San Francisco Museum of Modern Art, notes a common search for the aesthetic sublime that is their common inheritance from American Abstract Expressionism.

Van Vliet’s inheritance is still greater, reaching further; across continents, back into time, well into the collective unconscious. It encompasses the Paleolithic and Neolithic paintings of the caves at Altamira and Lascaux and the pictographs and petroglyphs from 2000 B.C. on the limestone canyons and cliffs of the American Southwest.

‘There’s a primal presence in the paintings. I don’t think I do music, I do spells’ said Van Vliet, when talking about his music in an interview with Lester Bangs for the Village Voice. Likewise his painting conjures ancient rituals and incantations, recipes for lost wizardry from the Egyptian Book of the Dead at the same time serving as contemporary philosophical or social commentary. For example; suggestive of both prehistoric hunting scenes and Picasso’s “Guernica,” “Ten Thousand Pistols, No Bumblebees”, a black on white painting of horned animal heads with human and animal figures floating about the canvas, moves in and out of the figure ground.

Like most primitive visionary artists, Van Vliet has had no formal training, yet the primitive quality of his work is matched by a highly intellectual sophistication. The paintings themselves can be seen as constructed dialogues between such contrasts, between the intellect and the emotion, between the real and the surreal the known and the unknown, between the animate and the inanimate.

Van Vliet creates a state full of static struggle and expectation in the series of paintings titled “The Drazy Hoops,” where we encounter a black dog, beset by a yellow spirit shadow form, below black webbing and haunting white cracks in the white background.

John Lane describes Van Vliet as a “modernist primitive, an artist whose remarkable intuitive gifts and love of nature have combined to create highly charged paintings that are at once jolting as well as lyrical.”

Van Vliet states in an interview with Rip Rense in the San Francisco Examiner ‘Actually what I try to do is turn myself inside out on canvas, to freeze the moment so that the person seeing it can observe what I froze. I try to turn what is going on in me into a still life of that moment.” Whatever it is that is going on in him seems manifest in the world outside of him as well. So much so that Van Vliet can be seen as a visionary chronicler of the true here and now. He paints a once upon a time in the west at the end of the twentieth century story that also transcends any specific time, place or individual and transcends the familiar in the personal yet universal way.

It is of particular interest that the work is being shown at Knoedler & Company, in many ways the quintessential American art gallery. They’re located on East 70th Street and recently celebrated their one hundred and fiftieth anniversary. Art dealers to the Erick family at the turn of the last century, they re best known for their association with the likes of Winslow Homer; John Singer Sargent, and Thomas Eakins. However over the years Knoedler & Co has represented numerous unsung, gifted American artists such as Albert Pinkham Ryder, setting a precedent for the Van Vliet connection.

And Van Vliet is, in as many ways, the quintessentia1 American artist. He was born in Glendale, California, on January 15, 1941 and was considered a child prodigy from the age of 4 when the animal forms he sculpted out of soap were regularly featured on TV. Moving on to make music playing with Frank Zappa, forming the Magic Band in 1964, becoming a rock and roll force and finally rebelling against rock and roll, itself the music of rebellion, he heads out for the Mohave desert to live in a trailer and spend his time making paintings. Van Vliet now lives on the Pacific coast of northern California writing poetry and painting, where some greens, colours of this new wilderness, are finding their way into his newest paintings and joining the desert palate.

Van Vliet’s story is a blueprint for the story of an American artist; a self taught gifted visionary out in the wilderness painting away. Painting the great American painting. Painting with intuitive vision, with a primitive, elementary understanding and acceptance of the complexity of the world we live in. Painting pictures so powerful the viewer is pulled through the painted surface and plunged down the rabbit hole, like the innocent Alice searching for a lost kitty where nothing is what it seems. Only the experience is more like falling into a black hole with Albert Einstein in pursuit of a lost dog, a lost Mr. Peabody. Van Vliet is out there painting the truth. Knowing that the truth, frightening or funny as hell, shall set you free.