By: Steve
In: By or about Don Van Vliet
Tagged: Skeleton Breath Scorpion Blush
With: 4 Comments 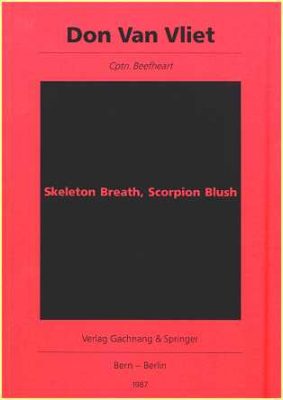 This is a wonderful selection of some of my favourites of Don’s paintings and poems, beautifully put together in a slender but substantial paperback. The reproductions of the paintings are simply glorious – they may be small in size, but the detail and colours are exceptional, putting the vastly inferior scans on this web-site to shame.

A small note near the back of the book states: ‘The poems have been assembled by Don Van Vliet especially for this edition’. It is probably fair to assume that these are Don’s favourite poems, and I certainly wouldn’t disagree with him.

The book features a poetic introduction from A.R.Penck entitled To Don Van Vliet, fortunately a different piece from his alarmingly self-indulgent For Don Van Vliet that appeared in Stand Up To Be Discontinued. Also included is a charcoal sketch by Don, what looks like a lino cut of Don by A. R. Penck, and a black and white snap of Don on the phone in 1985.

Difficult to find a copy of this as the book is now long out of print.