Refusal Of Leave To Land Report

On the 18th January 1968, The Magic Band were involved in a bizarre and humorous incident which resulted in their being refused entry to the UK and deported to Hanover. Here is the cover sheet and text of the official report – the text originally came from the Edinburgh Review no. 86. 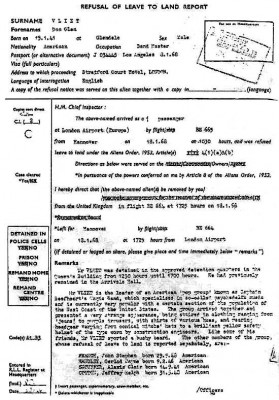 Refusal of Leave to Land (Remarks)

Mr VLIET was detained in the approved detention quarters in the Queen’s Building from 1230 hours until 1700 hours. He had previously remained in the Arrivals Hall.

Mr VLIET is the leader of an american “pop group” known as Captain Beefheart’s Magic Band, which specialises in so-called psychedelic music and is currently very popular with a certain section of the population of the West Coast of the United States. The group arrived together and presented a very strange appearance, being attired in clothes ranging from “jeans” to purple trousers, with shirts of various hues, and wearning headgear varying from conical witches’ hats to a brilliant yellow safety helment of the type worn by construction engineers. Like some of his friends, Mr. VLIET sported a bushy beard. The other members of the group whose refusal of leave to land is reported separately are:

Officers on the control were given ample opportunity to form an initial assessment of the group, as they took fully ten minutes to complete the relatively simple operation of filling in their landing cards. When they eventually approached the desks, it proved somewhat difficult to interview them, as they appeared to think on a completely different mental plane and found it difficult to grasp the rudiments of a passport control. However, it was eventually established that they had gone to Hanover from the United States to attend a musical convention and that they were now en route to a similar festival in Nice. All five members of the group possessed tickets from London to Nice and on to Los Angeles and they said that they merely wished to spend up to a week in this country on the way to France. None of them appeared very certain what the purpose of the visit to this country was, some saying it was purely for a rest, and others saying that they were to meet representatives of the Press. However, all of them denied emphatically that they had any intention of taking any form of employment during their stay.

Examination of the funds carried by the group showed that they had very little money, Mr. VLIET having two pounds 10 shillings and twenty marks (two pounds).

At this stage, a gentleman dressed in the American style, with long unkempt hair and with a cigarette dangling from his lower lip, approached the control and introduced himself as Mr. Peter Alexander Edwin MEADEN, born 11.11.41, British and described in his passport as an Artistes Manager. Mr. MEADEN said that he represented New Wave Records Ltd., 17-19 Stratford Place, LONDON, W.1., which firm was sponsoring the group’s visit to the United Kingdom, in conjunction with the group’s American recording company, Kama Sutra Buddha Records Ltd., New York. He offered to give any guarantees that might be required to facilitate the group’s entry into the country but when asked to establish his authority to do so, he was unable to prove his connection with these companies beyond producing a press handout and some blank headed notepaper. Mr. MEADEN denied vehemently that the group would be taking any form of work during their stay here and said that he had only brought them over for press appearances.

At this stage, all five members of the group were escorted to the baggage hall, where their luggage was examined by H..M. Customs. However, despite the fact that one member of the group had a large number of patent medicines in his case, nothing of interest was found. A search of the group’s instruments and their cases was also negative.

On return to the Arrivals Hall, I was informed by a member of the Special Branch that Mr. MEADEN was known to have convictions for illegal possession of a bren gun, taking and driving away a motor vehicle and selling intoxicating liquor without a licence. In view of this, it was felt that any assurances given by the gentleman would have to be treated with considerable reservations.

It was strongly suspected that the group were going to take engagements in this country and reference to the New Musical Express showed that they were billed to appear at two establishments the next weekend, namely the Middle Earth Club and the SpekeEasy Club, both in the West End of London. These clubs were telephoned and confirmed that the group would be playing on stage as a professional engagement. Reference to the Ministry of Labour showed that Mr MEADEN had applied for Ministry of Labour Permits for the Middle Earth Club engagement but that none had been issued, as he had claimed that the group were only to meet the Press at the club and would not be playing – denied by the club who were expecting a full show. Faced with this Mr. MEADEN at first protested his innocence but finally both he and the group admitted that the engagements had been arranged. Mr. MEADEN ten pleaded for clemency on the grounds of his own stupidity, a plea which was rejected.

The case was referred to the Chief Immigration Officer, Mr Armstrong, who directed that the group be refused leave to land on the grounds that they had come to this country to take unauthorised employment and with insufficient funds. They were informed that they were at liberty to contact whomsoever they wished and spent some time on the telephone before going to the Detention Suite, where they were given a meal.

As it now seemed that the group were to a considerable extent the innocents in what was by now a very tangled web woven largely by Mr. MEADEN, it was decided to make some effort on their behalf beyond the call of duty. To this end, the Chief Immigration Officer. Mr. R. A. MacDowall, spent some four hours on the telephone liaising with the Home Office, the Ministry of Labour, Pye Records and Equity. Pye came into the picture because the President of Kama Sutra Records, Mr. Artie RIPP, an American, was with the company negotiating some form of takeover bid by Pye for his company. Mr. MacDowall spoke with Mr. Ripp and with Mr. WISE of Pye and advised them that they should contact the Ministry of Labour and Equity and apply for permits. Should they be issued, then the position would be reconsidered in a favourable light.

Mr. Noreiko, Chief Immigration Officer, Headquarters, was informed of the case, lest there should be any representations. These soon materialised, from Mr. MEADEN’s solicitors, who asked that the group be admitted for a visit. This proposal was rejected.

Later in the afternoon, H. M. Assistant Chief Inspector, Mr. T. W. E. Roche telephoned for details of the case, as the Press Officer had approached him for information.

Despite all their efforts, which were considerable, Mr. Ripp and Mr. Wise were unable to secure the issue of Ministry of Labour Permits and the group were therefore returned to Hanover as directed.

Mr. MEADEN, on whose shoulders the blame for the whole incident must rest, was told by Mr. Ripp that his association with Kama Sutra ceased forthwith and he was a dejected man as he finally departed, muttering under his breath. Landing Card attached. An extra copy of this report is attached for the Ministry of Labour.

This was kindly typed in by Alastair Dickson, and was originally featured at Justin Sherill’s Home Page Replica. Many thanks to Justin for passing it along.