A collection of Don’s paintings and drawings is being exhibited at Michael Werner’s Cologne Gallery from 4 September to 16 October 2021, under the title “Ralf Love Don”.

Galerie Michael Werner is pleased to announce a solo exhibition of paintings by American artist Don Van Vliet, also known as Captain Beefheart (1941-2010). Featuring small- and large-format paintings and drawings made between 1979 and 1994, the exhibition reveals the compelling evolution of Don Van Vliet’s oeuvre. The b / w short film from 1993 “SOME YOYO STUFF” by Anton Corbijn will accompany the exhibition.

Van Vliet painted throughout his many years performing, and in the mid-1980s turned away from music to devote his intense creative energy solely to painting. Vital elements of Van Vliet’s creative DNA demonstrate in his paintings: a splatter and spill resolves into a haunting, vestigial human form, unsettling in its refusal to claim identity as either abstraction or figuration. This restlessness can be traced throughout the entirety of Van Vliet’s frenetic oeuvre. Drawing on the visceral power of mid-century New York School abstraction as well late twentieth century European painting, Van Vliet embellishes those legacies with a twist of terror and weirdness, his own brand of American surrealism.

No explanation of the title is given – who is Ralf?

There are about 40 works on display.

Find out more at the Michael Werner Gallery website which includes photographs of the exhibition in situ. 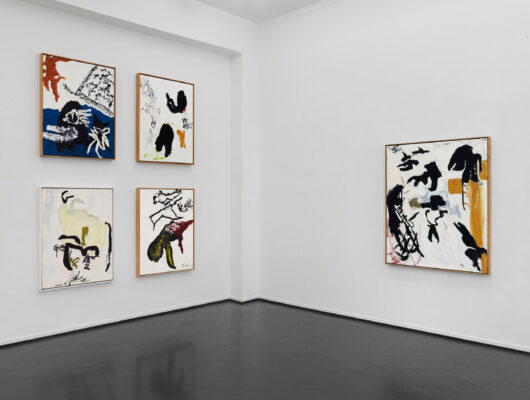