Pearls Before Swine. Ice Cream For Crows by Luca Ferrari

By: Graham
In: By or about Don Van Vliet
Tagged: Luca Ferrari, Pearls Before Swine
With: 0 Comments

A tribute to the art of Captain Beefheart 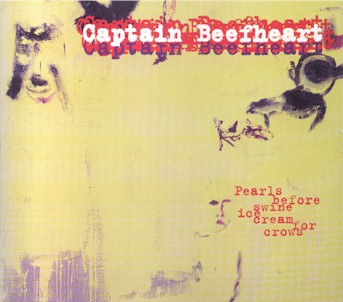 Sonic Books have produced several similar titles about ‘cult’ bands, the content being variable to say the least and the accompanying CD pretty much being a bootleg (although probably still legit within Italy’s more lax copyright laws).

This is a cd case sized paperback which covers the musical and painting career of our hero, in English and Italian.The translation from the Italian was done by an Italian and results in a number of odd sentences which keep the reader on their toes!

Luca Ferrari had already had a short piece called ‘Pearls Before Swine. Ice Cream for Crow. On the Relationship between Music and Painting in Captain Beefheart’s work’ included in the ‘Stand Up To Be Discontinued’ book. He has used the same title for his book (except it’s now ‘crows’ instead of ‘crow’) but that is all as this little book attempts to pack in a lot of information into a small space – and in two languages!

It is a fairly impressive gallop through the history of the Magic Band, plus a brief attempt at a critique of Don’s music and an even briefer analysis of his painting.

The discography is okay but isn’t very detailed and includes only one bootleg release while the bibilography is similarly short and now suffers by being very out of date with its information about web sites and the Beefheart fanzine.

The illustrations make this a nice book to flick through, there are photographs by Carl Berger and Anton Corbijn, a number of Don’s paintings and line drawings which on the glossy paper look good although the colour on the paintings is slightly weak. A neat pocket sized book to carry around and dip into now and then. 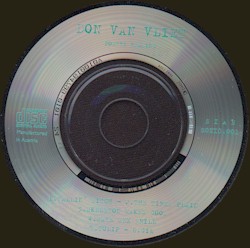 The CD is mini in size and content, being only three inches diameter and lasting for six minutes. It is just a straight lift from the CD that came with the ‘Stand Up To Be Discontinued’ book although it claims on the cover to be an ‘unreleased poetry reading’ – six poems recited by Don in a very shaky voice: Fallin’ Ditch/The Tired Plain/Skeleton Makes Good/Safe Sex Drill/Tulip/Gil.

Not an essential purchase but worth picking up if you come across it.