By: Graham
In: By or about Don Van Vliet
Tagged: Bill Harkleroad, Billy James
With: 0 Comments 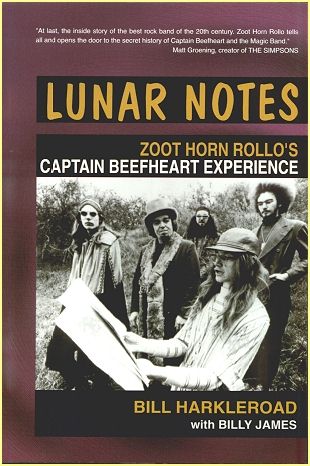 Synopsis from the back cover:

Bill Harkleroad joined Captain Beefheart’s Magic Band at a time when they were changing from a straight ahead blues band into something completely different. Through the vision of Don Van Vliet (Captain Beefheart) they created a new form of music which many at the time considered atonal and difficult, but which over the years has continued to exert a powerful influence.

Beefheart re-christened Harkleroad as Zoot Horn Rollo, and they embarked on recording one of the classic rock albums of all time – Trout Mask Replica – a work of unequalled daring and inventiveness. Further LPs like Lick My Decals Off Baby and Clear Spot highlighted what a truly innovative band they were, and what a dazzlingly original guitarist Harkleroad was becoming.

Since Captain Beefheart’s retirement from the music industry, many outside commentators have tried to put their finger on what was so special about The Magic Band of that time. Now for the first time we get the insider’s story. Harkleroad reviews the often uncomfortable and difficult inner workings of the band, giving an unparalleled insight into the way the music was put together. At last, we find out what it was like to record, play and live with an eccentric genius such as Beefheart.

In Lunar Notes Bill Harkleroad talks us through his time in the Magic Band, quite literally as much of this was ‘written’ on a dictaphone. Possibly because of this, it is significantly short on detail and I was left wanting more anecdotes, more insight, and simply more words. The whole book can be read in a single sitting if you really go for it.

However, we do get more that a passing glance at what it must have been like for the Magic Band to work with Don, and Harkleroad always seems more than a little modest when considering his contribution to the music.

While telling the story as a whole, Bill includes a chapter for each album that he played on, talking us thorugh the Magic band’s output from Trout Mask Replica up to Unconditionally Guaranteed track by track. This makes a very pleasing read, not unlike actually having him round for a few beers while listening to a few old favourites from your record collection.

It is a fascinating story, and despite the shortcomings, it’s one that anyone interested in the Magic Band would probably want to read.