By: Graham
In: 1976.12 Berkeley California
Tagged: Encounters in the wild
With: 0 Comments

Sent to me by Charles Holzhauer, from a show on 5th December 1976 at Todd Barkan’s Keystone Korner in San Francisco. Featuring (as you can see) a Van Vliet sketch. 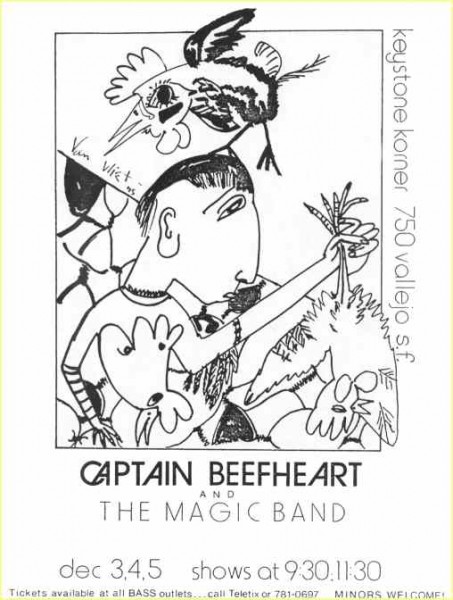 Charles wrote about this evening:

My friend Paul suggested that I go to an Italian cafe down the street and order a “two day espresso” (the Keystone was in Italian North Beach). I did so, and was soon bouncing off the walls.

I knew the bartender at the Keystone, who was sometimes able to get me in free on the guest list, and I could hang around after shows. This I did, and helped Denny Walley load his equipment into the truck. Fee Waybill came by to play the Tubes’ then-new version of “My Head Is My Only House Unless It Rains” for Don. Don was sitting in the empty audience seats with Waybill and was talking to his wife who was on the stage. After helping Denny, I stood in the doorway to the left rear of the stage (behind Jan, in Don’s line of sight), listening to “..House..”. I was swinging and swaying until Don suddenly shouted at me, “Don’t tell ME how to keep time! You gotta do it in 4/4! Why don’t you sit down and relax!”

Chastened, I did so. I think my motion disrupted Don’s train of thought when he was trying to talk to Jan.