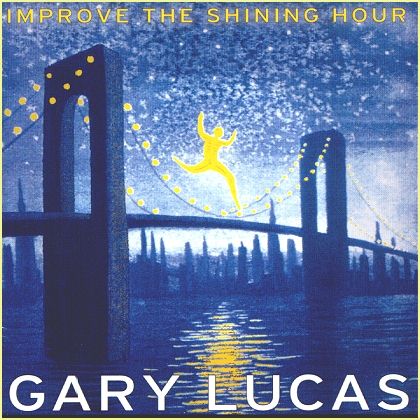 Gary Lucas is an exceptional guitarist, as these 18 tunes ably demonstrate. He has worked with a wide range of artists, all of which fit perfectly side by side on this CD, suggesting that he brings a lot more along with him than just a few nimble fingers.

The sparkling atmospherics chiming out of his guitar on all these numbers make the sound distinctively his own regardless of whether he’s producing squalling feedback (“Golgotha” with DJ Spooky), some very slithery slide (“Indian War Whoop”), or a beautifully plucked enchanted melody (“Follow” with Richard Barone). The possible sole exception to this unity of sound across the varying styles is the previously unreleased concert recording of Beefheart’s “…Blue Million Miles”; the sore thumb among seventeen fingers.

Also from Gary’s Beefheart days is a version of Flavor Bud Living, recorded live at the same show as “…Blue Million Miles” and a composition called “Oat Hate” which formed part of “Cardboard Cutout Sundown”. These three tunes do not sit among the album’s highlights, however, fine as they may be. Any Radar Station visitor considering passing on Shining Hour due to its relatively meagre Beefheart content is making a mistake – the real delights are largely to be found elsewhere in this collection. Mary Margaret O’Hara’s alluring “She Was Showing Me” is neatly described by Gary in the sleeve notes as “sensuous dementia” and is far stranger than any of the Beefheart offerings.

This is a fine collection and must make Lucas proud to look back over the twenty years that produced it. The only thing that confuses me is that picture of him with Richard Nixon….! 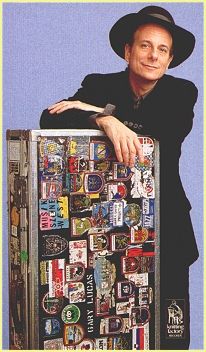 Sleevenotes for the three Beefheart-related tunes

Flavor Bud Living: “This is the solo piece that put me on the musical map. I suffered bloody fingers and sore muscles for months to master it, off a tape of John French playing it from the the as yet unreleased Bat Chain Puller album. I went out to the Mojave Desert to audition it for Don, who told me French had played it “too religiously” and instead had me use his “exploding note theory” to navigate my way through it from that point on. Then I had to come out and play the damn thing, cold, in the middle of the Beefheart set throughout our last tour of 1980-81. Wouldn’t have missed it for the world. And that number would then lead into…”

Her Eyes Are A Blue Million Miles: “… one of Captain Beefheart’s most beloved ballads – originally from the 1973 album Clear Spot. This was a real high point in the show as the Magic Band capered balletically around the growling ringmaster. My ambition in music had been to play with this guy ever since I had seen his debut concert in NYC in 1971. At this particular gig, I remember standing in the doorway of the club (the former Hungry Charlie’s) watching the students of my alma mater scurry off to the Cross Campus Library in the gathering twilight and thinking, “How did I get from Here to Here???” Truly a transcendent moment. Don’s still the coolest, in my book.”

Oat Hate: “This is a work tape of a composition Don played through once on piano, then sent to me on cassette with the simple instructions, “Learn this”. It took me about six weeks, negotiating five seconds or so of music a day, transcribing by ear and literally feeling out the notes on my guitar as I worked my way through it, like stepping gingerly through a mine field. When I got out to Amigo Studios in LA in the spring of 1982 to begin recording what became the last Beefheart album, Ice Cream For Crow, what I was told was to be utilised as a solo piece had become one-half of the rickety equation later known as “Cardboard Cutout Sundown”. Don had independently of me taught the rest of the band a discrete three minutes or so of music, and setting me off in semi-isolation from the rest of them and behind a wall of baffles, refereed the recording of the piece like a whistle-happy umpire, gleefully bellowing “STAART!” and “STOPPP!” when he wanted me to play my part (at double the speed of this work tape workout) against the band’s own full-on fury. Amazingly, you can hear the band and myself synch up for a miraculous near unison section near the end of the album track. How the fuck did he do that?!? Don would just nod all-knowingly, smile sardonically and draw deeply on his Dunhill pipe. Meanwhile, enjoy the Mexican jumping bean beauty of “Oat Hate” (Beefheart slang for sexual jealousy).”