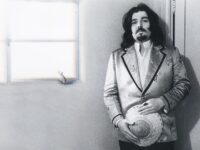 –Perhaps the most accessible of all Beefheart albums, and the one I would choose first to inculcate a novice into the variegated splendours of the Van Vliet oeuvre. Featuring maybe the most formidable line-up of them all with the twin guitar attack of Bill Harkleroad and Mark Boston, Artie Tripp on drums and marimba, and ex-Mother Roy Estrada on bass–plus guest shots from soul legends The Blackberries and guitarist Russ Titelman.

Produced by Warner Brothers staff hit-maker Ted Templeman (Doobie Brothers and Van Morrison amongst others), many legends have accrued to the making of this hook-laden masterpiece, including one whereby Ted basically told Don to go home and let Ted do the editing / whittling down of the raw tracks to whip them into some semblance of commercial shape before inviting Don to come back and lay down his vocals and harmonica (Don’s dreaded soprano saxophone, musette and simran horn were left back home in the actual chicken coop of a rural ranch overlooking the Pacific where Don and the band currently resided).

Ted also claimed in subsequent interviews that Don punched out Roy Estrada (herein dubbed Orejon–Spanish for “big floppy donkey ears”) for eating a hamburger before the recording session: “I mean, you can’t possibly play my music after eating a hamburger! POW!” I dunno, I wasn’t there–but what I do know is that one day in spring 1982 while we were tracking “Ice Cream for Crow” at Amigo Studios in beautiful downtown Burbank (same studio where “Clear Spot” was recorded), in walks Warner Brothers honcho Lenny Waronker with Ted Templeman and, mirabile dictu, Mike McDonald in tow, Mike sporting a cream-coloured satin baseball jacket (once upon a time a coveted status symbol in the music biz, this one emblazoned with a simple “Mike” on the back). And I got the chance to take Ted aside and put some gentle questions to him (I mean he had lambasted Don in some interviews)–and the guy looked highly embarrassed about having made these prior statements about working with Don to the press, although he neither denied nor confirmed them. What was clear to me though was just how happy both he and Lenny were to see Don again, God bless ’em–they seemed genuinely warm and supremely proud of having been a priori associated with such a legendary artist–and Don was in a very forgiving mood that day, and seemed tickled to see them both.

But I digress–so now, onto this album: from the Mexican jumping-bean guitar intro of “Low Yo Yo Stuff”, with marimba, bass and drums beating out a hypnotic tattoo, Don authoritatively dives in for the kill : “Fast Go Fast / Slow Go Slow / Rich are Rich and the Poor are Poor / But everybody’s doin’ the Low Yo Yo Yo Yooooo” (wazzat you may ask? Well let’s just say that Don loved to deliver some of the earthiest, saltiest, pithiest of observations in highly-coded beat poesy with extremely colorful imagery to disguise the very basic things he was singing about…and like Peter Green’s “Rattlesnake Shake”, this one’s about advocating masturbation on the road in lieu of consorting with ahem “those girls”). Next up, the infectious N’awlins second-line shuffle of Ed Marimba leads into a bluesy harp explosion (for anyone who claims Don couldn’t actually play an instrument, his harmonica prowess is peerless and undeniably gives the lie to this dismissive canard) and then a Paean to Women’s Lib (kinda) as Don sings: “Men, you been lookin’ all around for the women / But they’ve always been right there / Mmmmm Nowadays a Woman / has to haul off and Hit a Man / to make him know she’s there / Other night a woman came up and hit me / Like I wasn’t even there.” This track sports one of Zoot Horn Rollo’s most outrageous and indelible slide guitar solos, so incendiary live that Don at this point would mime trying to fan off and cool down the flames shooting out of Bill’s guitar when Zoot played it (similar to Ronnie Hawkins with Robbie Robertson in “The Last Waltz”. An old show-biz performance trick, in other words). And on and on.

Each song is an irresistible r ‘n b groove, the band never sounded tighter, with Don’s humorous and wacky worldview fully integrated into the production sound-field (maybe the best produced of all Beefheart albums). My own personal favorite is “Sun Zoom Spark”, with the opening crunch guitar spitting shards of metal at’cha and sporting an undeniable stop/start cowbell groove later appropriated by David Byrne on an early Talking Heads song (forget which, but you’ll know it when you hear it)…there’s also the title track, which was kind of sound-alike sampled on Joan Osborne’s “Relish” album for one of the songs (an album I worked on…I was requested to personally seek permission from Don for this borrowing of his guitar riff by that album’s producer, which I respectfully declined to do not having been in touch with the guy for oh about 10 years at that point, and not really ready to go back into the Lion’s Den on a fool’s errand–so they re-did the sampled guitar riff as a soundalike and gave Don partial writing and publishing credit for the song). And special mention must be made of the “daisy in a petunia patch” (a favorite Don-ism), the hauntingly beautiful ballad “Her Eyes Are a Blue Million Miles”, a love song written by Don for his wife Jan, which I covered with the fabulous Nona Hendryx and Jesse Krakow, Jordan Shapiro and Richard Dworkin on our recent “The World of Captain Beefheart” album on Knitting Factory Records (and it’s a real good ‘un if I may so–shameless plug).

The piece de resistance though has to be the slide guitar rave-up bug-eyed monster sci-fi classic “Big Eyed Beans from Venus” (again, wazzat mean? Well, remember Zappa’s “The Duke of Prunes”, which sported the lines: “I see your lovely beans / and in that magic go-cart / I bite your neck”…get the picture? (yes we see!) “Don’t let anything get in between us”, indeed– with Zoot Horn Rollo hitting “that long lunar note” and letting it float until the band and Don come crashing back in. It’s just the best. Live at Town Hall in NYC circa 1973, Bill’s amp shorted out just at the lunar note moment and Mark was seen covering for Bill by slyly playing the actual long lunar note on his blue Fender Coronado …but enough about that (although my review of this concert for editor Arthur Levy and Zoo World Magazine is available for viewing, seek and ye shall find).

This album of albums (comes to you in a see-through poly-vinyl sleeve) closes with a flashback to the Crazy World of DVV of old in the form of “Golden Birdies”, which opens with a lumbering brontosaurus of a bass and drums obligato by Mark and Artie and on into a stuttering, incantatory snaking guitar line by Bill (a paraphrase of the intro to “The Clouds Are Full of Wine (Not Whiskey or Rye)” from “Lick My Decals Off, Baby”), later to be joined by Artie’s unison marimba as Don booglarizes you with this spoken-word cross between the Arabian Nights and the Tale of the Monkey King: “Shhhhh sookie singabus / Snored like a red merry-go-round horse / And an acid-gold bar swirled up and down / up and down / in back of the singabus”. Don closes your eyes and then jerks you awake with the final spoken line: “And the pantaloon duck / white goose-neck quacked / Webcor, Webcor”. Encore, Encore!