By: Derek
In: Art
With: 2 Comments 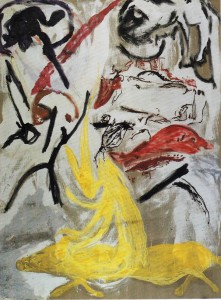 Four works by Don Van Vliet are included in an exhibition to be held under the aegis of New York’s Museum of Modern Art (MoMA).

MUSIC IS A BETTER NOISE is an exhibtion of art made by artists who are also musicians (or vice versa) or whose creative process has music as an integral part. Thurston Moore, Devendra Banhart, Alan Vega, Leigh Bowery, Eye and Kim Gordon are among the many other artists represented.

UPDATE, 31 October 2006: Vincent Del Basso took a few photographs at the show which you can view here, here and here.