By: Derek
In: Music, Tributes
With: 2 Comments 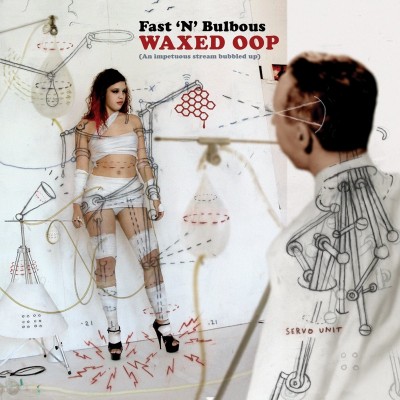 NOTE: GUITARIST GARY LUCAS HAS FALLEN ON THE ICE AND INJURED HIS ELBOW. HE IS EXPECTED TO MAKE A FULL RECOVERY, BUT WILL NOT BE ABLE TO APPEAR AT TUESDAY’S PERFORMANCE. HOWEVER FAST ‘N’ BULBOUS WILL STILL PERFORM AS SCHEDULED, AND PLAY MUSIC FROM THE NEW RECORD. GUITARIST PAT IRWIN (B52s, Raybeats. Eight-Eyed Spy) WILL FILL IN FOR GARY FOR THIS GIG. COME ON DOWN FOR A GREAT SHOW!

Celebrating the release of their new CD, Waxed Oop (an impetuous stream bubbled up) on Cuneiform Records, F&B makes a rare New York appearance on the eve of a European tour.

Here is what Troy Collins had to say about it in All About Jazz:”In addition to nuanced precision and shrewd arrangements, the ensemble’s most impressive feat is their ability to excavate the tuneful kernels buried in Beefheart’s labyrinthine tunes. Translating the Captain’s raspy diatribes into pithy horn charts, they transpose oblique tendrils of melody into opulent sketches of timeless, surreal Americana…”

In a subsequent mail which we received from Phillip Johnston we have learned that although Gary Lucas will be out of action throughout the Fast ‘N’ Bulbous European tour he will make a full recovery.

It is hoped that the tour will go ahead with Pat Irwin on guitar, although some promoters want to cancel the gigs if Gary is not able to play. Fast ‘N’ Bulbous hope to do all of the gigs.

While Gary is undoubtedly the star soloist of the band, there are a lot of other good reasons to see Fast ‘N’ Bulbous: the arrangements, the many other formidable musicians in the band, who are quite well-known and well-regarded in their own right, and the great music of Captain Beefheart. It’s possible that this could be the last chance to hear the band live in any form. If any fans are in areas near the venues and want to come, they should contact the venues and show support.

Meanwhile, over at YouTube, Seam Crooked Sam has posted some video of Fast ‘N’ Bulbous in action at The Knit earlier this year when they previewed some more of their new arrangements of Don Van Vliet compositions.