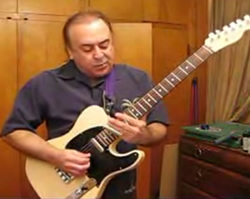 Greg played guitar in a the short-lived version of the Magic Band that was put together for the Knebworth Festival in July 1975 supporting Pink Floyd. This band also played a couple of shows at the Roxy in Los Angeles. Greg still plays guitar and occasionally performs in his home town of Chicago. In 2008 he posted a couple of short videos on You Tube of himself playing. One of these includes some scorching slide work. He has also contributed extensive guitar parts on John French’s City of Refuge album. An interview with Greg about his time with the Magic Band was conducted by Steve END_OF_DOCUMENT_TOKEN_TO_BE_REPLACED