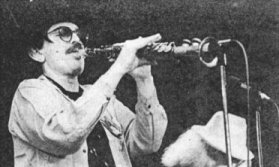 [alert_box type=”info”]This review was written by Mark Leviton and appeared in the 27th February 1981 edition of ‘BAM'[/alert_box] “You either love it or hate it,” explained the guy standing behind me to his wary girlfriend during Captain Don’s blistering set. “It’s the weirdest music I’ve ever heard, but I love it.” I don’t think the friend was convinced. Captain Beefheart certainly is an original, and with his new band (guitarists Jeff Tepper and “Midnight Hat Size” Snyder, bass and keyboard man Eric Feldman and drummer Robert Williams) he’s launched on a retrenching operation, basically abandoning his sometime commercial attempts and heading for the woods of END_OF_DOCUMENT_TOKEN_TO_BE_REPLACED