By: Steve
In: Tenuous, Tributes
With: 3 Comments 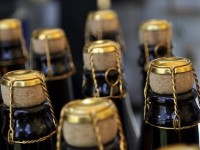 If you’re in Portland, Oregon on Thursday 17 January take a trip out to Belmont Station “Portland’s Premier Beer Store and Bier Cafe”.

In one of their regular beer tasting evenings you’ll be able to sample a Captain Beefheart Beer. Here’s how they describe it:

Captain Beefheart is a collaborative brew between Jason McAdam of Burnside Brewing and Alex Ganum of Upright, both of whom can be described as meat enthusiasts. In their own words:
“The idea behind Captain Beefheart was to create a complex beverage with savory flavors rooted in the kitchen. We started with a malty copper colored base and added Turkish bay leaf, long pepper, and sixty pounds of charred beef hearts to the kettle boil. Rounding it all out was a fermentation carried out by a soft finishing Scottish ale yeast. The beer drinks with pleasant aromatics from the spices and has a light minerality accentuated by the pound of salt also thrown in the kettle. 5.85% ABV”

Sounds like it’s as eccentric and challenging as the man himself!

Thanks to Andy Bean for spotting this one.