[alert_box type=”info”]Article taken from the 24th August 1997 Sunday Telegraph.[/alert_box] Also guaranteed to have a catastrophic effect on your love-life is the music of Captain Beefheart, subject of John Peel’s adoring if oddly po-faced tribute, The Artist Formerly Known as Captain Beefheart (Tuesday, BBC2). But then perhaps he too is a “boy thing.” Years ago, I never understood why any woman I succeeded in luring home vanished swiftly into the night as soon as I played her some of the Captain’s more tender bellowings. All this time later, I couldn’t help but be moved to find that he’d lost none of his power to soothe END_OF_DOCUMENT_TOKEN_TO_BE_REPLACED

[alert_box type=”info”]Article taken from the 17th August 1997 Observer, originally titled simply ‘UK Television’.[/alert_box] We at the Observer can boast a couple of ancient links with Captain Beefheart, subject of tonight’s Rock Cults programme, The Artist Formerly Known as Captain Beefheart (BBC2, 11.15pm): Tom Hibbert’s band, the Angry Crabbers, played support to Captain Beefheart in a San Francisco club in 1981. `Nice set, son,’ rumbled the Captain when they came off stage. `I’ve got one word of advice to you: don’t sign with Virgin.’ Well, as those old cosmic links go, I was initially instrumental in signing the Captain to Virgin in 1974, after an END_OF_DOCUMENT_TOKEN_TO_BE_REPLACED

[alert_box type=”info”]Article taken from the 17th August 1997 Daily Telegraph.[/alert_box] But why did he throw it all in and go to live in the Mojave Desert? Mike Barnes finds out. “I’M a genius, I was born with my eyes open,” said Captain Beefheart back in 1972. A lot of people still agree with him. John Peel is one of them. “If there has ever been such a thing as a genius in the history of popular music, it’s Beefheart,” he says. “I heard echoes of his music in some of the records I listened to last week and I’ll hear more echoes in records that END_OF_DOCUMENT_TOKEN_TO_BE_REPLACED

[alert_box type=”info”]Article from unknown source on the 16th August 1997. If you know where this came from, please let me know.[/alert_box] An ornery cuss is Don van Vliet, the subject of next Tuesday’s BBC2 documentary Rock Cults: The Artist Formerly Known As Captain Beefheart, introduced and narrated by No 1 Beefheart fan John Peel. Frank Zappa, for instance, was almost literally on his deathbed before he could bring himself to comment in level tones about his former musical partner, the duo having fallen out horribly and infamously almost 20 years before. Tuesday night’s fascinating programme in fact arose accidentally out of producer-director Elaine Shepherd’s previous END_OF_DOCUMENT_TOKEN_TO_BE_REPLACED 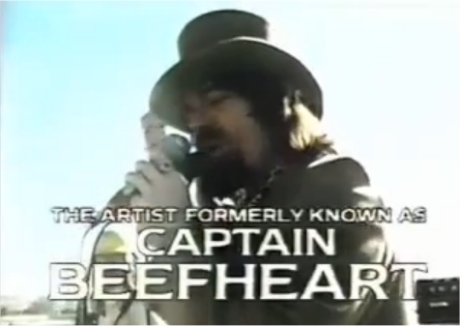