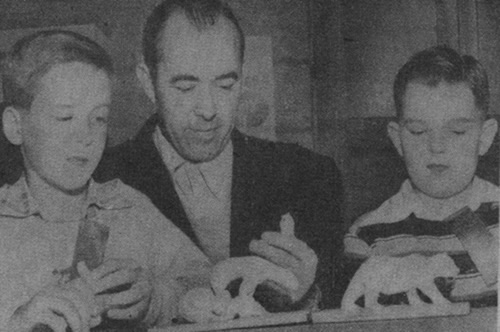 One of the many myths surrounding Don’s early years involves his association with a Portuguese sculptor called Agostinho Rodrigues (sometimes written as Augustino Rodriquez). Don’s story is that he trained under this artist and appeared on a weekly television programme with him sculpting wild animals at Griffith Park Zoo. Searches for information about Rodrigues (using variations on the spelling of his name) have come to nothing. However, in 2003 a bit more about Rodrigues, Don and animal sculpting came to light. The Rhino art box Riding Some Kind Of Unusual Skull Sleigh included a book called Splinters, a collection of personal photos and other ephemera END_OF_DOCUMENT_TOKEN_TO_BE_REPLACED