This is a list of ‘Various Artists’ compilations and samplers that have included individual Captain Beefheart songs. 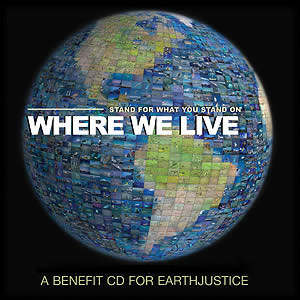 2003 US Where We Live: Stand For What You Stand On on Higher Octave/Delabel/EMI
This is a benefit album with proceeds going to the environmental organisation Earthjustice which campaigns for the Universal Right to Clean Air & Clean Water

This is a significant release because it includes the first recorded work by Don since the poems that appeared on the 1993 Stand Up To Be Discontinued CD. It’s not a new song, nor is it ‘proper’ recording as such. It’s a 35 second version of Happy Birthday, called “Happy Earthday” sung by Don over the phone to the album’s compiler (and Don’s agent), Mike Kappus. 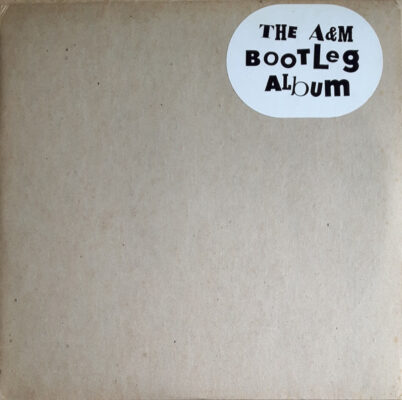 Official Promo Double Album with tracks by A&M artists like Joe Cocker, Procol Harum and T.Rex etc. – labels have NOT FOR SALE – Strange unprocessed cardboard gatefold sleeve with no writing, photos or track listing, just a white sticker on front with title printed using ransom note fonts like parody of a real bootleg – Side 4 has Beefheart’s 4 A&M tracks from 1964.

Unusual CD examining the best of A&M’s West Coast signings circa late ’60s/early ’70s, including 3 of the 5 Beefheart A&M songs – “Diddy Wah Diddy”, “Moonchild” and “Frying Pan”, plus stuff by The Tubes, The Flying Burrito Brothers (featuring Gram Parsons) and Gene Clark (of the Byrds). 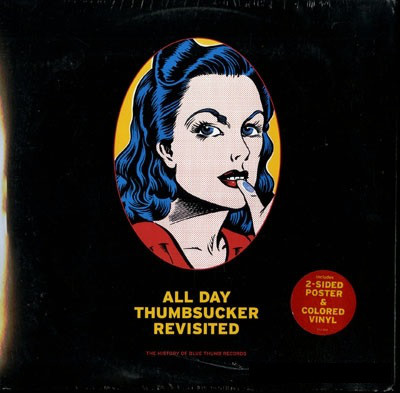 Blue Thumb – the label named by Don and set up by his manager Bob Krasnow to release the Strictly Personal album. 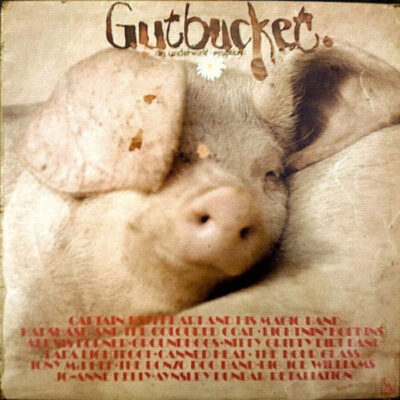 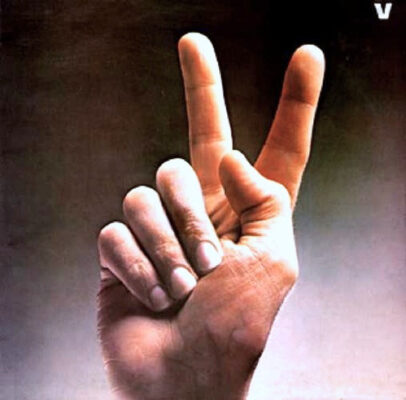 1975 UK Original of ‘V’ Sampler on Virgin VD2505
2LP with gatefold sleeve – “Mirror Man” and “Upon The My-O-My” recorded live at the Theatre Royal, Drury Lane, London, UK on 8th. June 1974. The entire concert was recorded (Engineer: Phil Newell) for proposed live album which was cancelled due to Unmagic Band and crap songs. It was eventually released on CD in 2006 as part of Virgin’s reissue of all their Beefheart albums. 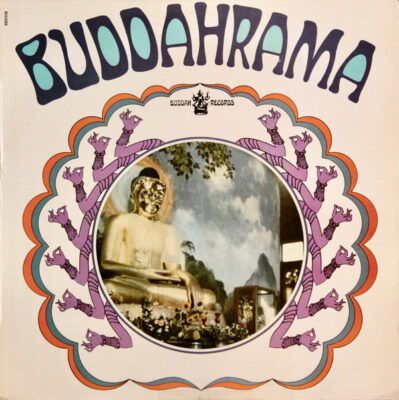 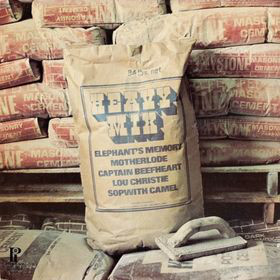 1971 US vinyl Heavy Mix Sampler on Pickwick SPC-3324
“Electricity” and “Plastic Factory” are probably the heaviest tracks on this album. Lou Christie, heavy?!

19?? CD Best of Bubblegum.
“Yellow Brick Road”. A 2CD collection of late 60s bubblegum that Buddah specialised in at the time. 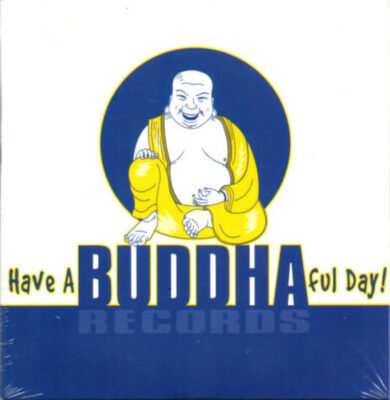 1999 CD Have a Buddhaful Day on Buddha BDJ1.
This was for promotional purposes only and sent out to select retail buyers. Packaged in a thick card sleeve it features “Sure Nuff ‘n’ Yes I Do”. 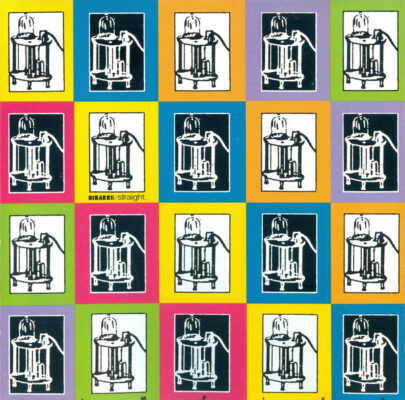 1991 US Bizarre / Straight sampler CD on Rhino PRO2 90086 –
NOT FOR SALE – For Promotion Only on CD and inserts – art (psychedelic) CD – “I Love You, You Big Dummy”/”The Floppy Boot Stomp”. Also includes The GTOs “The Captains Fat Theresa Shoes”.

“Captain Beefheart’s cousin, The Mascara Snake, went to my high school in Reseda and changed my life, but that’s another story. More importantly, Beefheart head Don Van Vliet came to the Bizarre label; he and Frank had gone to high school together, and it was a natural progression.

One of my fave-rave memories of Don Van Vliet occurred in Frank’s famous basement. Don had just finished Shiny Beast and wanted to play his favourite track for me, ‘Bat Chain Puller’. I settled in a comfy chair and Don got down on his knees in front of me, whispering all the words an inch from my face with menacing mirthful exhilaration: ‘Bat Chain Puller. Puller Puller'” 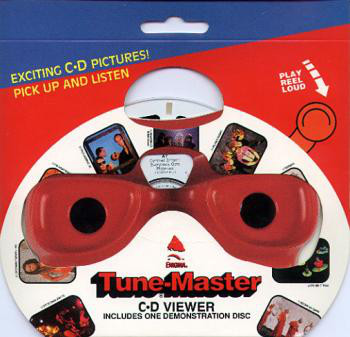 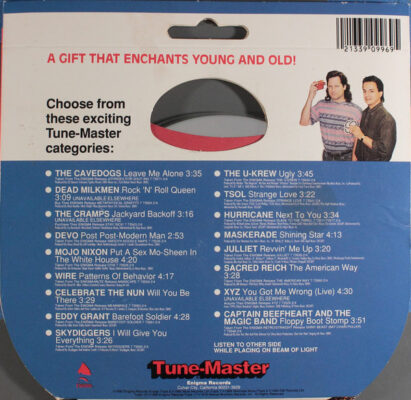 Warner released a series of excellent and influential samplers during the early 1970s which many fans have cited as being their first introduction to the music of Captain Beefheart & The Magic Band. 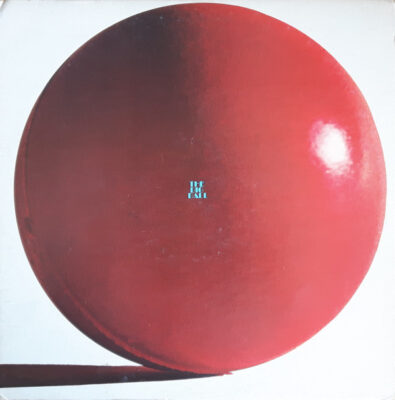 1970 US Zapped Sampler on Reprise/Bizarre PRO 368
“Old Fart At Play” and “The Blimp(mousetrapreplica)”.

There are two versions of this sampler with different track lists although the Beefheart tracks are the same on both.

The first press is a single album on the Reprise label with a portrait of Zappa on the front cover. The later version, with photomontage cover, is a double album on the Bizarre label. Both versions have the same catalogue number! 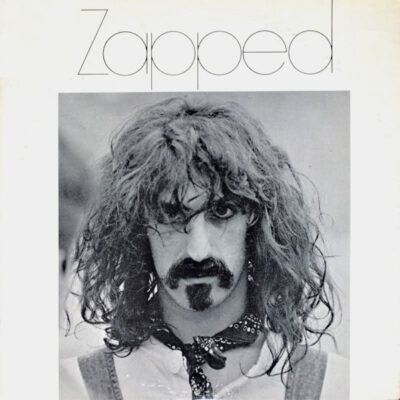 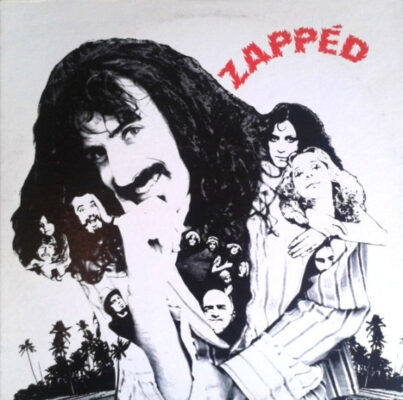 The later version has chocolate brown Bizarre inner sleeve with a dark picture of FZ and:

We make records that are a little different. We present musical and sociological material which the important record companies would probably allow you to hear. Just what the world needs another record company.

on one side and:

Congress shall make no law respecting an establishment of religion, or prohibiting the free exercise thereof; or abridging the freedom of speech, or of the press; or the right of the people peaceably to assemble, and to petition the Government for a redress of grievances. 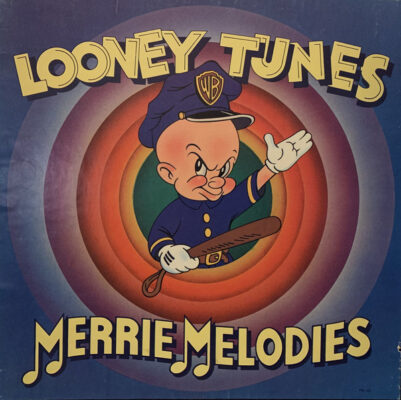 1970 US Looney Tunes and Merrie Melodies Sampler on WB PRO 423
3 LP Sampler in a Box with cartoon character on front and “That’s all Folks” on back over multicoloured labels – Lost Leader inners.

“Lick My Decals Off, Baby” is on Side 5 – ‘Avant and National Guard’ with The Mothers, Alice Cooper and Zappa – specially written text calls Beefheart a “poet, painter, screenwriter, novelist, humorist and super musician” . 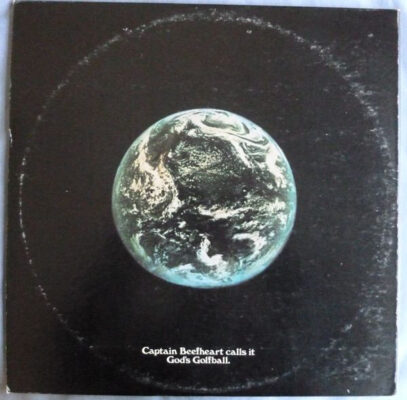 1972 US The Whole Burbank Catalogue Sampler on WB PRO 512
2LP set with gatefold sleeve. Back cover has a photograph of Earth from space with the words “Captain Beefheart calls it God’s Golfball” (see pic) – “Click Clack” appears on Side 3 – ‘Wondrous Weeds’ 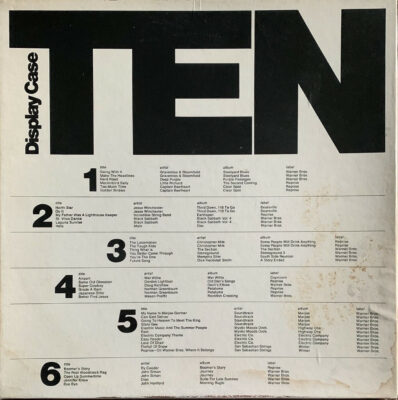 1972 US Display Case Ten 3 LP Promotional Vinyl Record Box Set – Warner Bros. Records new releases from artists in 1972 Compilation. Pressed and distributed by mail order in the USA only – “Too Much Time”, and “Golden Birdies”.

1977 UK Golden Hour of Simon Says on Golden Hour GH862 –
“Yellow Brick Road” and “Abba Zaba”. A budget label that had 60 minutes of music on every album. This looks like it was basically a Buddah sampler without actually saying so 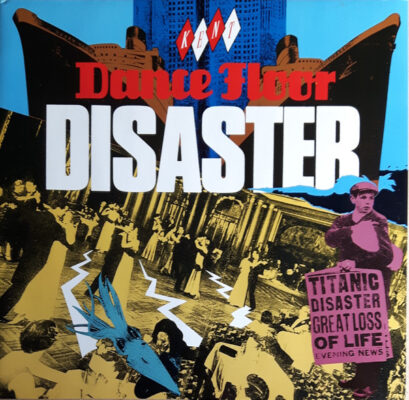 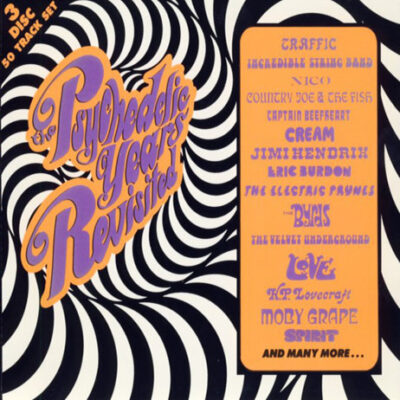 1992 UK Classic Rock Collection Vol. 5 FREE CD with Magazine RCD Vol.1 No.5 –
picture inside (Spotlight Kid) and has potted history with ‘one of music’s most inspired madmen’ – “Abba Zaba” 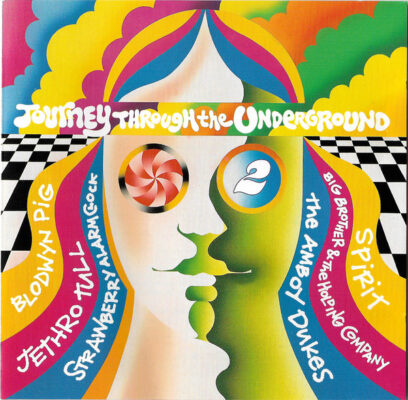 1994 France CD Journey Through The Underground on Kenwest Music KNEWCD 740.
“Safe As Milk”. 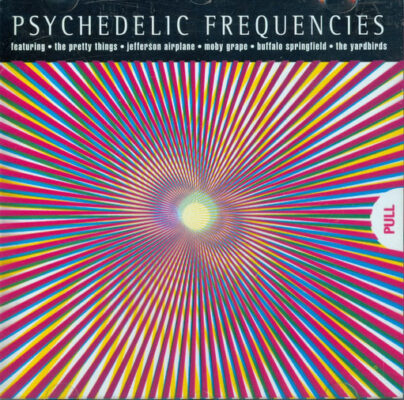 1996 UK CD Ocean of Sound 2 – Crooning on Venus on Ambient/Virgin AMBT 7245 8 41718 2 7.
One of the excellent compilations from writer and composer David Toop to accompany his book “Ocean of Sound”. Includes an unusual selection, the wonderful “White Jam”!

1996 3CD Masters of Rock on BMG/Dressed To Kill DTK BOX 54
“Mirror Man”. 50 tracks on 3CDs from Judie Tzuke to Motorhead! Same album as “Invasion of the Rock Zombies” (see below) 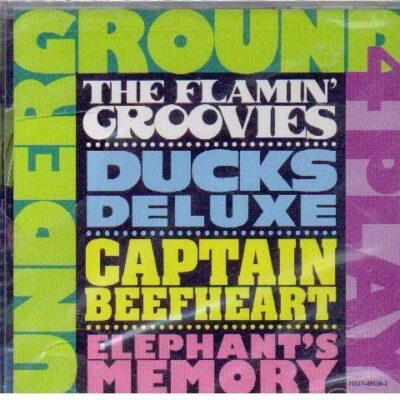 1996 US CD 4 Play Series: Underground on Buddah/RCA/BMG.
A series that features four bands on one CD. The Beefheart tracks are “Abba Zaba”, “Autumn’s Child”, “Dropout Boogie”.

1997 UK CD Ocean of Sound 4 – Guitars on Mars on Ambient/Virgin AMBT 24.
Another in the David Toop series, this time with two of Don’s instrumental pieces played by Gary Lucas – “Flavor Bud Living” and “Evening Bell”

1997 UK CD Sixties Apocalypse on Age of Panic AOP51.
Another 2CD set from Castle Communication with “Gimme Dat Harp Boy” and “Mirror Man”. Has a picture of Martin Sheen from ‘Apocalypse Now’ on the cover. 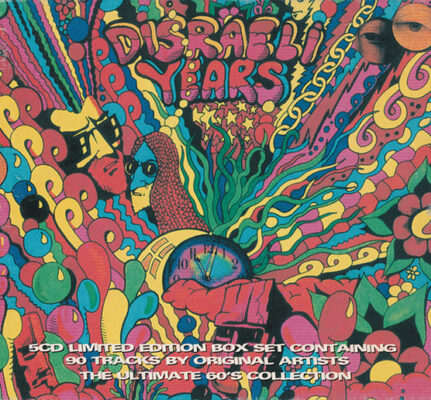 1998 US CD Feel The Buzz: Hit Time on Polygram.
A collection of songs about dope and booze. Includes “Zig Zag Wanderer” 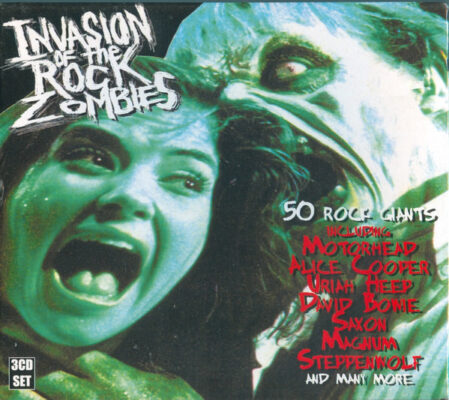 1999 US CD Invasion of the Rock Zombies on BMG/Dressed To Kill REDTK111
“Mirror Man”. Re-release of the 1996 collection “Masters of Rock”.

2000 UK CD Under The Influence on NME UTI.
“Orange Claw Hammer”. Sampler given away free with NME music magazine.

2002 UK CD Back To Mine on DMC BACKCD11.
A collection put together by New Order. The CD version is specially mixed by the band while the triple vinyl version is unmixed. It kicks off with “Big Eyed Beans From Venus”

2002 UK CD Totally Wired on UNCUT 04.
“Harry Irene” is included on this freebie given away by the UK music mag Uncut 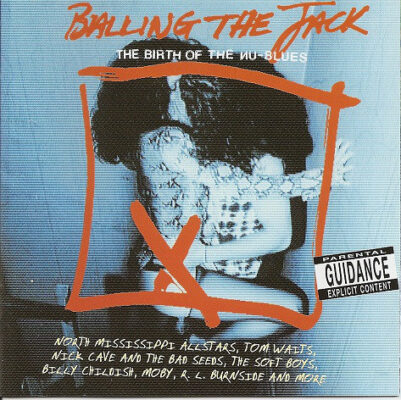 2002 US CD Balling The Jack (The Birth of the Nu-Blues) on Union Square/Ocho ‎– OCHOCD012.
“Electricity” . An interesting collection that also includes a Gary Lucas track (‘The Poison Tree’) plus, among others, Tom Waits, Diamanda Galas and Billy Childish

2005 UK CD John Peel – A Tribute ‘…and this one fades in quietly…’ on WMS226.
“Big Eyed Beans From Venus” is included on this excellent double album celebrating the musical legacy of the influential broadcaster who championed Beefheart and many other outsider artists over the years. 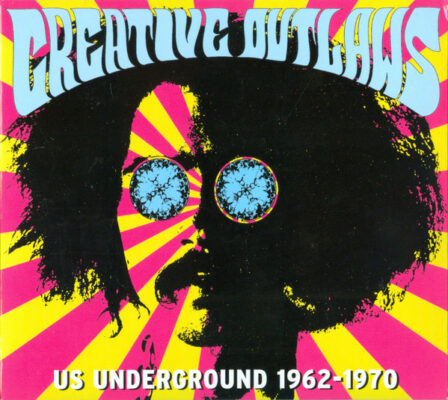 2006 US CD Creative Outlaws – U.S. Underground 62-70 on Trikont US0338.
Strange choice of “Dachau Blues” for this 60’s anthology which is supposed to present the real artists of Underground Music and their message, aims and overwhelming fascinations – anti-war, drugs, love, peace, revolution, freedom of expression, freak out, humour etc.

2006 Holland CD Marmalade Skies. The Ultimate Psychedelic Experience on Disky CB 903668.
A 3CD compilation of mostly well known ‘psychedelic’ classics from the 60s. Includes “Gimme Dat Harp Boy” and “Abba Zaba”. Strangely, “Abba Zaba” is a live version from the 1974 Cowtown, Kansas show and according to the sleeve notes has been ‘licensed from Ozit Morpheus Records’ (odd, I didn’t think bootleggers could licence the music they released!). 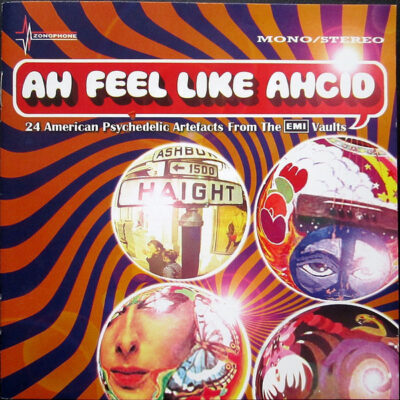 2007 US CD Ah Feel Like Ahcid – 24 American Psychedelic Artefacts From The EMI Vaults on EMI/Zonophone.
A interesting 2CD compilation of some of the less well known psychedelic music from the 60s. Not only is it named after the Strictly Personal song but it’s also included as the final track.

2009 US CD Where the Action Is! Los Angeles Nuggets: 1965-1968 on Rhino.
‘Zig Zag Wanderer’ appears on the first of this four disc 101 track box set. There are other tracks with a Beefheart connection – The Rising Sons ‘Take A Giant Step’, The Factory ‘Candy Cane Madness’ and Fapardokly (aka Merrell & The Exiles) ‘Tomorrow’s Girl’

2018 3CD The Old Grey Whistle Test: Jetboys and Ladytrons on Universal Music Music Group/Spectrum Music UMCOGWT03
A varied selection of “Original studio recordings of tracks made famous by the hit BBC music show”. Includes the album versions of the two songs that Don performed on the show in 1974, “Upon the My O My” and “This Is The Day”. 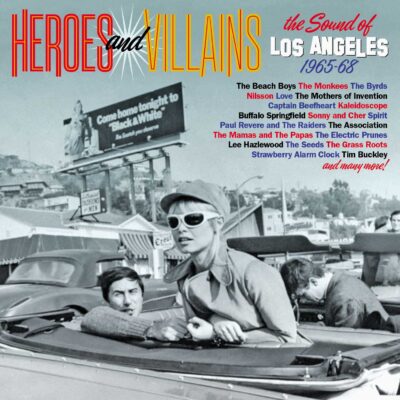 I have to thank the Discogs website – www.discogs.com – for help with release information on some of the more obscure items and images of some covers.